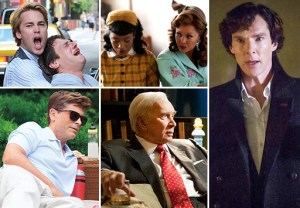 If history is any indicator, Emmy voters like a little, well, history in their Outstanding TV Movie winners.

The last four champs in the category — 2010’s Temple Grandin, 2009’s Grey Gardens and 2008’s Recount and 2007’s Bury My Heart at Wounded Knee — all had their roots in real-life characters and situations.

Heck, even in the last three years — when the Academy of Television Arts and Sciences merged Movies and Miniseries into one overarching division — two of the three victors (2012’s Game Change and 2013’s Behind the Candelabra) followed that trend.

Seeking to buck recent history? The pure fiction of PBS’ Sherlock: His Last Vow and Lifetime’s The Trip to Bountiful.

RELATED  Emmys 2014: ‘Meaningful’ Tribute to Robin Williams in the Works

Tomorrow and Friday, we’ll launch two more “Who Should Win” Emmy polls, so come back to TVLine.com to weigh in on who’s most worthy of TV’s biggest honor!