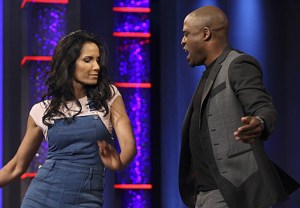 Padma Lakshmi helped the CW cook up some superlatives this Monday night.

With her visit to Whose Line Is It Anyway?, the top chef drew 1.9 million total viewers and a 0.7 demo rating, up 19 percent and a tenth to score the improv program’s best numbers since September.

Paired with a solid 8:30 rerun (1.85 mil/0.7), Whose Line delivered The CW’s most watched 8 o’clock Monday hour in three-and-a-half years, and its highest rated in two-and-a-half years.

RELATED Mistresses Recap: If You Like It Then You Shouldn’t Put a Wiretap On It

RELATED Under the Dome Recap: From ‘Eh’ to Zenith

CBS | Under the Dome (6.9 mil/1.5) delivered the night’s largest audience but dipped a tenth in the demo to match its series low.