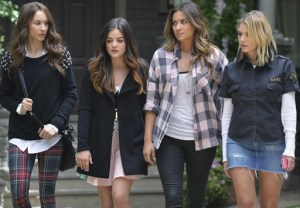 “I am so done with you.” Emily’s words to Alison on Tuesday’s Pretty Little Liars may have seemed harsh, but honestly, can you blame her?

These girls have risked everything — their reputations, their sanity, their lives — to help her over the past few years, and she finally went too far this week by falsely identifying Cyrus as her kidnapper. In fact, she “remembered” an entire scenario in which Cyrus mugged her and left her with that scar on her thigh. But did any of that even happen?

That was a rhetorical question; of course it didn’t happen. In fact, the final moments of the episode revealed that Ali was the one who paid Cyrus to take the fall in the first place. I just can’t with this girl anymore.

SISTER, SISTER | Of course, Emily wasn’t the only liar pushed to her limit this week. Tired of tip-toeing around their issues, Spencer and Melissa finally had an honest sister-to-sister talk, which took a crazy turn when Melissa suggested that Spencer run away with her. Like, out of the country. “It’s not safe for me here,” Melissa said. “Or you.” As for her involvement with Cyrus — she was caught giving a man money on Spencer’s surveillance video — Melissa opted not to comment, though she began making a confessional video at the end of the hour that I’m dying to see. HANNA’S DUET | Hanna picked up a few interesting new hobbies this week, including jogging — which is probably smart, considering all the running these girls have to do — and singing, which seemed a little more unusual. It was all part of her attempt at living a “normal” life, but naturally, she couldn’t even make it through a simple choir solo audition without something going horribly wrong. After Mona fainted mid-audition, Hanna found a copy of Cyrus’ mugshot in her purse, which led to a surprising, albeit temporary, alliance to learn more about Ali’s “kidnapper.” The girls bonded over how Alison’s return, even more than her disappearance, has rattled them both. (Am I crazy, or are these two becoming friends again?)

SECOND CHANCES | And then there was Aria, who spent the hour wrestling with her feelings for Ezra. Sure, he lied to her and seduced her with seedy, underhanded intentions — she should have a chat with True Blood‘s Sookie at some point — but when he was in the hospital, she was super sad. It was strange seeing Ella try to talk Aria into giving him a second chance, though if she even knew half of what was really going on in her daughter’s life, there wouldn’t even be a show to watch.

OK, your turn to talk: Are the girls right to cut Alison loose? Is Melissa really as innocent as she seems? And should Aria give Ezra a second chance? Drop a comment with your thoughts below.