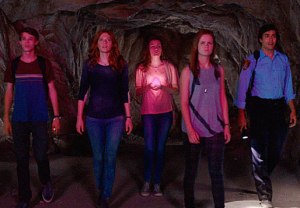 Under the Dome fans, are your heads still spinning?

Even though the CBS drama has kept us guessing for most of the series’ run, Monday’s episode introduced an entirely new batch of questions. So, to summarize, here are the five biggest takeaways from our latest visit to Chester’s Mill:

1 | THE TUNNEL LEADS TO ZENITH
After he and Julia inform the four teenagers of Sam’s death, Barbie realizes the only way to prove that Sam killed Angie is to recover his body from the tunnel’s abyss (easy!) and reveal the scratches that Angie left on his chest. Ever the adventurist, Barbie revisits the tunnel with Julia and Rebecca, and begins rapelling into the darkness — but before too long, his anchor comes loose, and knowing that Julia can’t possibly hoist him up, Barbie cuts the tether and falls alllllllll the way down into the void (prompting Julia to let out a rather impressive Drew Barrymore-in-E.T. scream).

When Barbie comes to, he finds himself in his hometown of Zenith, and he’s not the only one there. Sam Verdreaux is also walking the streets of Zenith, straight to a psychiatric clinic where he finds sister Pauline alive, well and teaching an art therapy class. Sam fibs and tells Pauline he “fell” off the cliff in Chester’s Mill (rather than flinging himself off it), and Pauline apologizes for not telling Sam that she planned to fake her death nine years ago. All in all, these two seem to be getting along remarkably well for not seeing each other in nine years — and they’re very quick to forgive each other for keeping huge, life-altering secrets.

2 | GETTING OUT OF THE DOME ISN’T ALL IT’S CRACKED UP TO BE
While it might come as a relief to Barbie and Sam to be out of Chester’s Mill, spiraling down that wormhole apparently has its consequences. The evidence? Our old friend Lyle, also in Zenith, who has done nothing but sit in a wheelchair, stare blankly at the obelisk in the center of town and say “Melanie” over and over again since he arrived. And it seems the side effects of, y’know, traveling through a portal are beginning to show in Sam, too, who begins to have uncontrollable jitters in his arm.

3 | BARBIE’S DAD KNOWS A THING OR TWO ABOUT THE DOME
After a close call with a few angry Zenith associates (who are none too pleased about Barbie disappearing for three, again just three, weeks), Barbie pays a visit to his estranged father, who happens to be the owner of a lucrative energy company. Barbie begs Dad to pull a few strings and get him back inside the dome so he can deliver a message to Julia. (Side note: What strings would Mr. Barbara be pulling, exactly? Is penetrating the dome really that easy?) Barbie’s dad reluctantly agrees (in the name of love!), and the two set off through Zenith to start putting the plan in motion.

Confession time, TVLine readers: I rewound the final seconds of this week’s episode at least three times, and I cannot seem to make out the (seemingly important) object buried deep in the woods of Zenith. I think I see a few bricks? A handprint? Your intel is greatly appreciated in the comments. (Update: Ah, it seems the mystery object is a red door, exactly like the one Pauline has painted in her studio. Thanks for the detective work! Proof positive that I need to invest in a hi-def TV.)

4 | JUST CALL JOE “MR. ROBOTO”
When Julia tells Joe and Norrie about the abyss through which Barbie fell, Joe shares a cool piece of info: He’s president of the high school’s robotics club! In order to see down into the void, Joe fashions a pretty awesome drone, which sends pictures to a monitor at the top of the cliff. And although the signal goes out for a few seconds, the group does see a brief, flickering image of Zenith and the significant obelisk. Later, Junior and Melanie bring The Egg down into the tunnel, and once again, an explosion of pink stars forms Zenith’s skyline in the air.

5 | BIG JIM IS EVERYWHERE
Big Jim, as he is wont to do, seems to appear everywhere he’s not wanted throughout the episode. But his creepiest cameo, without a doubt, is a sudden appearance in Rebecca’s home, where he tenders a stern warning about keeping secrets from him. (And in case you’re wondering, “Does Big Jim still think the dome ‘chose’ him?” the answer is a resounding yes.)

Which of the episode’s takeaways intrigued you most? Are you happy to see some of the action taking place outside the dome? And did you not get a slight chuckle out of this observation from Joe: “There was never a tunnel down there. And now… there is.” Sound off in the comments!