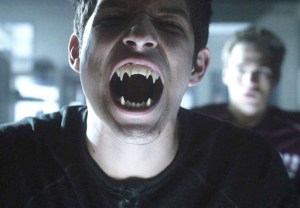 Scott and his pack set a trap for the Benefactor on Monday’s Teen Wolf, but unfortunately, they forgot the first rule of villain-catching: If you’re going to fake your own death, you’d better tell your mom first!

Mama McCall suffered an epic, albeit totally appropriate, breakdown before eventually learning that Scott was merely in a Kira-induced coma (which really shouldn’t have been that much of a relief.) Fortunately, there was one upside to Scott’s coma: He got to have a series of freaky dreams, which — thanks to Stiles’ brief stint as the Nogitsune — has basically become a staple of this wacky little show. His dreams always started the same way, with Li’l Liam throwing something to him; only the item of choice kept getting progressively more twisted, until Scott was literally bashing Liam’s chest open with a tomahawk! Cue the blood, cue the screaming, cue my darkest nightmares being realized.

And just when things seemed their bleakest, Kate “Impeccable Timing” Argent decided to crash the party with her Berserkers, and she managed to ruin things even more. She eventually retreated back to her precious Peter, but not before putting Kira’s mom in the hospital. And what was with Kate and Peter’s “I’m not the Benefactor” speeches? You know who would totally say something like that? THE BENEFACTOR. HUMAN NATURE | Potentially controversial statement alert: I’m starting to think Braeden and Derek might be Teen Wolf‘s hottest pairing yet. The way she dressed his wounds, while undressing him with her eyes, was pure sex. This feels like a truly healthy relationship that’s built to last — which means Braeden will be six feet under by the end of the season, as is the fate of all of Derek’s ladies. (Say hi to Jennifer for me, Brae!)

FAMILY MATTERS | Meanwhile, Malia did a little snooping into her past, following the whole “Malia Hale” deadpool revelation. After a brief stand-off with Papa Peter — she figured out pretty quickly that he could kill her with a single glance — the estranged father-daughter duo got down to business: Who is Malia’s real mom?! All Peter knows is that she goes by the name “Desert Wolf,” which actually seemed to resonate with Malia. (And, hey, three cheers for Stiles getting to be the big spoon for once. It didn’t last long, but it still happened.)

A GIFT FROM GRANDMA | Speaking of super-weird family drama, Lydia’s mom gave her the ashes of her grandmother to scatter on her 18th birthday (party!!!), but both ladies were in for a wicked surprise. Not only was Nana Martin’s urn filled with mountain ash, but she also left her granddaughter a note before she “died” — and it’s code! Does this mean Lydia’s grandmother is alive? And is she the Benefactor? (No, seriously, I’m curious. Just when I think this show is starting to make sense, along comes Lydia’s not-dead banshee grandma or whatever.)

Teen Wolf fans, do you think Lydia’s family is connected to the Benefactor? Are you hungry for what Derek and Braeden are serving up? And how do you predict this season will end? Watch our interview with the cast, then drop a comment with your thoughts below.