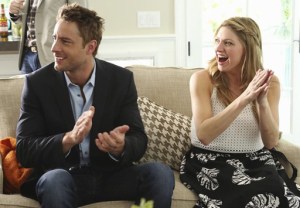 Mirror, mirror on the wall
Who’s the craziest Mistresses character of all?

Could it be Karen Kim, as she orders Pad Thai
During bathrobe-clad sleepovers with patients who cry?

And then there’s Doc Jacob, who’s totally cute
But too moony-eyed to detect a malpractice suit

I’m ruling out Scott, despite his shoe fetish
Though his marrying Joss might make Harry turn reddish

APRIL | April’s stalker dude shows up at her house — but it turns out he’s with the FBI and he’s trying to track down her not-dead husband Paul, who’s gotten mixed up with an east-coast drug cartel. In a scene that’s pure comic gold, Karen shows up outside Maison Sur Mer, gets in touch with her inner Sydney Bristow and deducts that April’s house and workplace are under wiretap surveillance. Turns out, crazy Karen is right — although her sexurity (typo and it stays) expert Gary Dourdan turns out to be on vacay, so the home-sweep job goes to a guy with whom none of our core cast is likely to become intimate. (Insert sad-trombone sound here.) When April realizes that even Lucy’s jewelry box has been bugged, she storms down to FBI HQ — and no, she’s not going to take a seat in the waiting area! (“I am here to find out why the FBI bugged my 12-year-old daughter’s bedroom: DO I NEED AN APPOINTMENT FOR THAT?” she seethes wonderfully.) When she gets inside the building, though, she sees something shocking and terrible: Daniel. Not wearing a tight Henley. Or a skimpy bathtowel. But a drab blue FBI windbreaker. And her face is like, “What in the whatting what?”

Key Questions | Was Daniel bedding April all part of an FBI sting operation? And if so, is he working from a CIA playbook written by Homeland‘s Carrie Mathison? If that’s not the case, and he’s really in love, would April be so crazy to forgive him — once she’s got an immunity deal and Daniel’s made sure she’s not about to be the next forced employee of a Cuban drug cartel?

KAREN | Oh Em Gee, this MESS! So the episode kicks off with Anna waking up the morning after her emotional confession to Karen — ON KAREN’S COUCH. And when Anna asks if it would be weird for her to get a cup of coffee, our recently suspended psychiatrist is all, “I think it’s safe to say we’ve passed that boundary,” before offering her a towel and unlimited access to her bathroom. (I mean…) The next day, Anna calls Karen in the middle of a possible mental breakdown/drug overdose/panic attack — who can tell, because it’s over the phone — but instead of dialing 9-1-1, Karen goes to Anna’s flea-infested apartment, takes her pulse, drives her to the hospital for tests and then invites her to be her roomie — and even lets her choose their takeout option on Night One!!! (Oh, if I could just hear Elizabeth Grey’s reaction to all this. Actually, Rina Mimoun, is it too late for a Webisode featuring Elizabeth Grey’s reaction to all this?) Jacob, who’s clearly gotten a taste of “Hotel Karen” (if I ain’t being too subtle) responds to news of his possibly suicidal, possibly former prostitute ex-girlfriend crashing on the couch of her therapist/his current girlfriend with a big goofy smile and the most obvious observation in the history of the world: “It’s definitely not the appropriate thing to do…” and then adds, “but that’s why I love you.”

Key Questions | This is soooo going to end in a three-way, isn’t it? (And how did it take me this long to arrive at the tawdry realization?) Also, what exactly did Karen need to get out of her bathroom/shower before Anna was allowed to go up there? (Karen’s collection of hooker wigs?) And is it possible Anna has a nefarious motive — seeing how Karen did steal her man (however inadvertently)?

JOSS | When Joss gets invited to Scott’s grandma’s 97th b’day — dang, Old Girl looks terrific, no? — Harry gets in her head, telling her she’s a boozy, sex-joke-dropping tornado who’s something of an acquired taste for the future mother-in-law set. Joss comes close to smashing the metaphorical $300 soap dish she’s bought as a gift by acting as if Scott’s weird for wanting his family to dig her, but the big day is all hugs and charades and miniature soaps — and Joss admits to her beau that the familial closeness is all too new to her, seeing that it’s only been her and sister Savi against the world their whole lives. Clearly moved — and moved to action by Grandma June’s enthusiasm — he slips an engagement ring into a pair of pumps, and (¡bam!) I’m already envisioning a montage of Joss trying on wedding gowns. So is Harry, seemingly, though who he’s imagining as the groom is an entirely different matter.

Key Questions | Was Joss’ interaction with Scott’s family so sweet that you’re totally on his team now or was it so sweet it made you root for her to do something rash and untoward with her ex-brother-in-law? Also: Was Scott’s decision to bring his shoe fetish into his marriage proposal a Liz Lemon-style dealbreaker?

SAVI | Savi’s a fairly passive player in her storyline for the first two-thirds of this week’s episode, discovering (along with everyone else at her firm) that Toni has accused Dom of sexual harrassment in the wake of their one-night stand. Dom (who might want to change the spelling of his name to Dumb) realizes too late that Toni never had another job offer and that she set him up for a takedown — something she openly admits to out in the parking garage. Last partner in = easiest target, buddy! Savi finally invites Dom over for drinks and a chat — and explains to him why her nonexistent relationship with her dad makes her always eager to be the focused, together half of her relationships, to take care of guys who are a mess and need her desperately. It’s a great moment for Alyssa Milano and Jason George — a moment of quiet, somber realization. And when Dom demands to know why he was the only one who was ever all about the Dom-Savi dynamic, Savi has an epiphany: “I was also an ‘us’ with Harry — so there were consequences and wreckage.” She takes his hand, just like her took hers in the hospital in the Season 1 finale, but it’s not a romantic gesture, not really. “We never had a chance, did we?” he asks. And just like that, the final embers of the formerly scorching-hot love affair die out.

Key Questions | Is it possible for Dom and Savi to rediscover the magic? Could a common enemy in Toni bring them back together? Or are they kaput completely? And dreadful as Toni may be, isn’t it a more interesting storyline if she winds up triumphing by the end of Season 2 — even if it’s just to watch her get torn down in (what will hopefully be) Season 3?

Your turn. What did you think of this week’s episode? Which couple do you ship hardest? Did you gasp at the Daniel revelation? Or at the engagement? Or at Jacob’s “I love you”? Hit the comments with your thoughts!