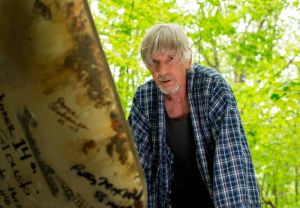 In this week’s episode of The Leftovers, Garvey Sr. escapes from the mental institution just in time to save Jill from suffocating in a refrigerator. (Kids, don’t try that at home. Or anywhere.) But, as you’d expect of someone on the run from the loony bin, he starts more trouble than he stops. Here’s how it all shakes out…

NO LUCK BUT THE BAD KIND | Early on in “Solace for Tired Feet,” Garvey and Nora end their fifth date — wait, we missed four whole dates?! — by heading to her place to have sex for the first time. Unfortunately, Meg and one of her GR cronies are already there, doing that creepy stare-smoking thing that they do, which kinda ruins the ambiance. Rain check? Check. Garvey has less enjoyable but more urgent matters to attend to, anyway, once he finds out from Jill that his dad is on the loose. After Lucy insists that Garvey Sr. wouldn’t be coming to her, he’d be coming to Garvey, the beleaguered chief has one of his Twin Peaks-y dreams, this one involving Dean, a dead Laurie in the back of his truck and a mad dog trapped in a mailbox. What does it all mean? Who the hell knows? Certainly not Garvey, especially after he wakes up with a bloody, bitten hand and a mad dog tied to a tree in his backyard. (He doesn’t remember any of it — including Aimee bandaging his hand… and more? Worrisome!)

THE MORE YOU KNOW | Next, Garvey makes a beeline for the library that his father once burned down. Apparently, he’s been at it again. No matches this time, but he’s made an absolute mess of the National Geographic back issues, punched an officer and asked a janitor to lend him $200. (Huh?) Shortly thereafter, Jill alerts Garvey that Garvey Sr. is at their house. Once again, he asks for $200. Once again, no dice. Things seem to be calming down — Garvey is taking Garvey Sr. back to the funny farm — when they run into the GR protesting Matt’s “Save Them” campaign, and ol’ nutso gets away. (D’oh!) Later, Garvey discovers the Jif jar full of money that his dad left for Matt and deduces that the reverend must know where he is. Which he does. And they’ll be perfectly happy to meet Garvey, Matt swears, as soon as Garvey Sr. gets something. (No, really: Huh?) Finally, the trio converge on a diner, where Garvey Sr. says that, although he tried to keep Garvey out of this, “they” wouldn’t let him. With that, he produces a May 1972 issue of National Geographic and tells Garvey to accept it and, with it, his purpose. (At the risk of being redundant, huh?) When Garvey refuses, his father smacks him and makes a terrible scene. But at least he’s back in custody. And off this, Garvey runs to Nora’s, and, the GR be damned, they get it on. (Tattletale that she is, Meg immediately blabs scribbles to Laurie that her ex is sleeping with Nora. Laurie’s response: “So?”) The next morning, Garvey is in an unusually good mood… until he finds another copy of the May 1972 National Geographic that Jill ordered for her grandpa. And, for some reason, the mad dog barking in the backyard makes him consider looking more closely at it. (For the last time, huh?)

CRAPPY BIRTHDAY | Meanwhile, in Gary, Ind., Tom is ordered by Wayne to tape half of his remaining cash (6k) to a mystery mailbox. Rather than just let the dough go, though, he waits for it to be picked up, then follows the guy who takes it. Turns out, the guy is yet another Tom, a chump charged with guarding a very young, pregnant Asian girl (who shoots Tom in a jealous fit over Christine). Returning to the hovel that he shares with Christine, Tom discovers that she’s delivered a girl in his absence.

OK, your turn. What did you think of the episode? Personally, I still don’t understand about 90 percent of it — 95, even? — but I can’t resist going along for the ride. Hit the comments!