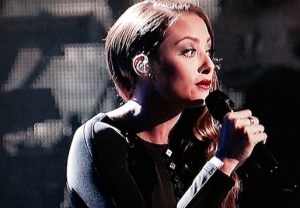 It won’t be easy, but for the first three paragraphs of tonight’s Rising Star quarterfinal-round recap, I’m going to be unabashedly positive, determined to grab the reins and hold back any/all negative commentary. I won’t even take the easy road with deliberately neutral reporting like, “I saw Kesha’s side-boob” or “host Josh Groban wore socks emblazoned with carnivorous fish.”

Ummmmmmmmmm… sooooo…. let’s see here… Audrey Kate Geiger’s “New York State of Mind” was exquisitely phrased and deeply felt; if I’d paid money to watch her in some smokey jazz lounge (with two-drink minimum), I’d have left a happy customer. Better still, East Coast voters correctly put the two weakest contestants at the bottom of the eight-vocalist heap (though their choice for No. 6, Shameia Crawford, had damn well better get the West Coast save, despite her unfortunate oversinging).

OK, so one paragraph to go… Let’s hear it for Brad Paisley, who delivered a stinging “no” vote to perceived front-runner (AKA mortal lock for the finale) Jess Kinch, righteously insisting the kid dig deeper than “clichéd cover songs” like “Money (That’s What I Want)” and actually earn the victory that he all but sealed up three or four weeks ago.

Nice enough? It’ll have to do. Because now it’s time to weigh in on the eight remaining contestants in order from lowest percentage of viewer/judge votes — Brad, Kesha and Ludacris only contributed 3% each tonight — to highest.

(Side note: Good job, Kesha, voting “yes” to all eight contestants and proving yourself as indicriminate as you are inarticulate in the process!)

Austin French, “House of the Rising Sun” — Grade: C-
89% (including all three judges)

What did you think of tonight’s Rising Star? Who were your faves? Did anyone get robbed? Does anyone deserve to “win”? Share your thoughts in the comments!