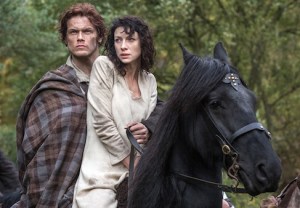 Let’s start this recap of Starz’s new drama Outlander with a Loch Ness-size disclaimer: I have been a fan of Diana Gabaldon’s sci-fi/romance/historical fiction novels since a friend introduced me to them in college. I love them with abandon. I have reread them more than once. When I was pregnant and thought I was having a boy, I seriously considered naming that boy James so I could call him Jamie.

Yep, I enjoy the Gabaldonverse that much. So while I can promise you I will watch Starz’s adaptation of her books with a critical eye, I also feel it’s important for you to know that I will be kvelling while doing so — and I dinna think that will change anytime soon.

In a few minutes, I want to hear what you thought of the series premiere, “Sassenach.” But first, let’s review the major developments of Outlander‘s first hour.

HIGH LIFE IN THE HIGHLANDS | “People disappear all the time,” a woman informs us via voiceover, and it’s not long before we meet that woman: Claire Randall, a willowy, Justine Bateman-esque combat nurse who’s back in civilian life after the end of World War II. In flashback, we watch a blood-soaked Claire work on a soldier’s very nasty leg wound moments before she learns that the fighting has come to an end in Europe.

Back in the present – that is, 1945 – Claire and her husband Frank arrive in a small Scottish town for their second honeymoon; though they wed before the war, her work as a nurse and his as some kind of military covert ops agent meant they’ve only seen each other a total of 10 days in five years. (Side note: That might’ve been 10 days too many for me – I kid! But seriously, Frank is so boring. I appreciate that executive producer Ron Moore & Co. want us to be invested in the Randalls’ marriage, and Tobias Menzies is a great find for the part, but good GOD je suis prest to get to the 1700s, know what I mean?)

The Randalls’ stay in town can be summed up as: learning about local superstition, pretend babymaking on an ancient bed, actual babymaking (or trying, at least) on an ancient bed, genealogical research with a local pastor, stilted conversation about trolls and then – dirty! – Frank going on an, ahem, archaeological dig at Castle Leoch while Claire throws her head back in pleasure. (Side note: That didn’t happen in the books, if I recall correctly. And I would have. Because I am a teenage boy when it comes to these things.)

CRAIGH NA DOOM | One morning before dawn, Claire and Frank drive up to watch a harmless pagan ritual take place at a Stonehendge-like circle of stones at Craigh na Dun. The Randalls hide in the shadows as local women dressed in robes and carrying torches dance to herald the sunrise; the custom has something to do with the upcoming Gaelic celebration of Samhain, which is right around Halloween. The sequence is beautifully shot, and Bear McCreary’s done a really nice job with the music for the show, especially here.

The Randalls return to town, but Claire wants to go back to Craigh na Dun to pick some flowers. Frank is going to do something dusty with Rev. Wakefield, so the Randalls make a plan to meet later. Remember how Claire told us that people disappear all the time? It’s coming. SEE YA, 20TH CENTURY | While picking flowers at the circle, Claire hears a buzzing, puts her palms against one of the stones and then the world goes black. (Side note: That’s it? Any other book readers a wee bit disappointed in Claire’s trip through time? I don’t need schlocky sci-fi effects, but I was looking forward to how the book would translate the highly detailed experience.) When she wakes up exactly where she passed out, she rushes out to find her car gone and some men dressed as British soldiers shooting up the woods nearby.

Claire runs away… and nearly runs into a man who looks just like her husband, except he’s also dressed as a Redcoat. He introduces himself as Jonathan Wolverton Randall, captain of the local dragoon squad – and Claire knows exactly who he is, having overheard Frank natter on about his ancestor during one of their afternoons at Rev. Wakefield’s. Unfortunately for Claire, Jack Randall is far less civilized than his progeny: He accuses Claire of being a whore and then tries to rape her.

He’s interrupted by a small man who knocks him out and then does the same to Claire when she tries to catch the British soldiers’ attention. When she comes to, she’s been brought to a small house where a group of men are gathered. Their leader is apparently the bald, bearded Dougal; Claire, totally wigged out, pulls herself together a bit when she realizes that one of the men has a dislocated shoulder that needs tending. And that’s when we get our first real look at James Alexander Malcolm MacKenzie Fraser.

Quick casting note: I think Caitriona Balfe fits one way of seeing Claire; in my head, I always pictured someone more akin to a young Alex Kingston. But Sam Heughan certainly jives with my mental picture of Jamie, especially when he speaks. So as Claire manhandles Jamie’s arm back into its socket and they set out on the same horse, I’m all in.

SINKING IN | There are some mishaps as the group rides – Dougal thinks Claire’s a British spy, Claire nearly escapes during a skirmish with some Redcoats but Jamie stops her from leaving – and then Jamie falls off his horse, bleeding heavily from a hidden gunshot wound. Claire demands that his friends get her a “sterile bandage and some clean cloth,” then looks incredibly irked that they have no clue what she’s talking about. Jesus H. Roosevelt Christ, Claire, figure it out: You have somehow traveled back in time to the 1700s.

By the end of the episode, Jamie has called Claire “Sassenach” for the first time – and it is every bit the warm caramel of an endearment that I hoped it would be – and the travelers arrive at Castle Leoch. That “Ye need not be scairt” scene from the trailer? Though it’s not in the first episode, dinna fash; it’s coming up soon.

Now it’s your turn. What did you think of the Outlander premiere? Those unfamiliar with the books: Did the episode capture your attention? Gabaldonians: Did it live up to your expectations? Grade the episode via the poll below, then hit the comments to give us all the details.