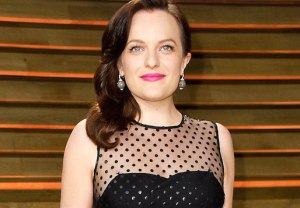 Elisabeth Moss is setting the record straight about rumors that she’s in talks to snag one of the four coveted lead roles in True Detective‘s closely-watched second season.

In a recent interview with USA Today, the Mad Men actress smiled when asked about the buzz, before telling the paper that she hasn’t been approached by HBO — at least “not in the way everyone is talking about… I had to ask my own people, ‘Have you not told me something?'”

Moss isn’t perturbed by the headlines, however premature they may be. “For me as an actor who’s been in this business for over 25 years, it’s so flattering to be associated with that show,” she said. “[And] for anyone to think that I could be a part of that show.”

In mid-July, word spread that Colin Farrell and Taylor Kitsch are reportedly in serious discussions to join Season 2. And earlier this month, we reported that Vince Vaughn is also eyeing one of the four lead roles.