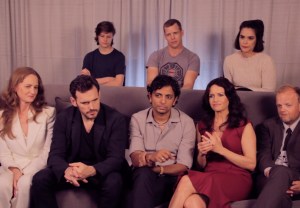 There may — or may not — be a twist at the end of this video interview with Wayward Pines‘ executive producer M. Night Shyamalan and the cast of his upcoming Fox event series.

After all, Shyamalan made a name for himself writing and directing gotcha! films like The Sixth Sense and Signs.

And the fact that his new cast — which includes Carla Gugino (Political Animals), Toby Jones (The Girl), Melissa Leo (The Fighter), Matt Dillon (There’s Something About Mary), Shannyn Sossamon (Mistresses) and Charlie Tahan (Law & Order: SVU) — likens the thriller to Twin Peaks and Twilight Zone indicates that the drama’s got secrets to spare.

Still, Shyamalan promises to “tell a beautiful story from beginning to end with closure,” regardless of whether the 10-episode tale  is extended (a la Under the Dome).

“You will get answers to everything,” he tells Michael Ausiello in TVLine’s San Diego Comic-Con interview suite.

Press PLAY on the video below to see Shyamalan and the cast roll out the Wayward Pines welcome wagon.