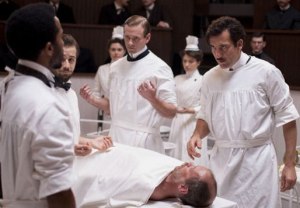 “We now live in a time of endless possibility.”

So proclaims Dr. John Thackery on Cinemax’s The Knick, as he gives an impassioned speech about the future of medicine.

The year 1900, in which The Knick is set, was indeed an exciting time for the medical community, as doctors made new revelations in their field. But the turn of the 20th century was also decidedly unglamorous for other reasons — among them racism, sexism and social class differences.

All of these elements appear in The Knick’s first hour, helmed by Emmy winner Steven Soderbergh (Behind the Candelabra). John Thackery (played by Closer’s Clive Owen) is immediately introduced as the Dr. House of the 1900s: brilliant doctor by day, liquid cocaine addict by night.

RELATED  The Knick Renewed for Season 2

After Thackery’s mentor is driven to suicide following a devastating and unsuccessful surgery, Thackery becomes chief surgeon at New York City’s Knickerbocker Hospital — but not on his terms. Rather than allow Thackery to hire who he’d like as assistant chief of surgery, the wealthy father-daughter pair overseeing The Knick insist Thackery hire Dr. Algernon Edwards (Andre Holland, 1600 Penn).

And why shouldn’t he? Algernon is qualified, he’s intelligent… but he’s also a black man, and Thackery won’t stand for an integrated hospital staff, a point he makes quite clear in his first meeting with Algernon: “You can only run away and join the circus if the circus wants you. I don’t want you in my circus.”

But Algernon is brought on anyway, despite Thackery’s protests, and we quickly learn that Thackery’s racism is only one of his many flaws. In a particularly harrowing scene, Thackery’s cocaine withdrawal renders him unable to perform surgery at the hospital — until rookie nurse Lucy injects the drug into the underside of his privates. (True story: That scene had me cringing more than any of the surgery sequences, which are definitely not for the squeamish.)

Still, it’s clear that Thackery is far from the only corrupt guy walking Manhattan’s streets. Elsewhere in the premiere, a pair of ambulance drivers spend their day threatening other first responders who get in their way, and the city’s health inspector eagerly accepts hush money from negligent landlords.

It’s a colorful cast, no doubt, and The Knick combines its rich characters with smart writing and compelling cinematography. The medical drama’s first hour is thoroughly gripping — as long as you don’t plan on eating while you watch.

What did you think of The Knick‘s debut episode? Grade the premiere via our poll below, then hit the comments to back up your choice.