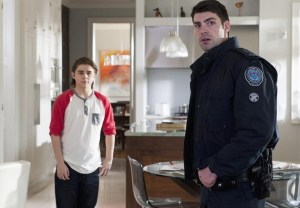 Rookie Blue fans, we need to talk about Chris.

Apparently, some time after their big fight, Dov convinced his friend to get some help. So Thursday night’s episode starts off with the cop attending a NA meeting under the guise of “Dave.” (I’m not sure admitting your name is Chris gives anything away, buddy.) He tells the group about how he feels lost, especially after he losing custody off his son who he discovered wasn’t even his son. It certainly is a believable reason for what Chris is going through, but it’s obvious that he’s just using his own sad story to placate the group and, especially, Dov. Chris tells his pal the meeting was a good idea. Riiight.

Dov wants to believe Chris is really trying, but as the hour goes on, it becomes clear that he’s being, well, screwed over. First, he missed his meeting with an intelligence officer because he was “babysitting” Chris. Then, after he discovers that Chris is still using, Dov confronts him in the middle of a crime scene.

“It’s not like I’m your junkie brother!” Chris exclaims. Yeah, that one stings. Dov’s claims that Chris’ new extracurricular activity is affecting his ability to do his job is proven true when they miss all the signs that the teenage victim — young Dean Winchester/Degrassi alum Dylan Everett! — is actually the perpetrator of the home robbery. The boy ends up shooting himself in the head, but somehow is still breathing. Meanwhile, the bullet went into the wall and created a gas leak. Oh, and the guys are locked in the room from the outside and any electricity might trigger an explosion.

They make it out, but that’s enough for Dov. He plans to tell Oliver the truth because he knows how this ends — Chris either overdoses or kills himself like Dov’s brother — and in both scenarios, Dov loses his friend. Chris decides to tell Oliver himself, but we don’t get to see the scene, which, frankly, feels like a cop-out (no pun intended). Did Chris go through with it? What was Oliver’s reaction? What’s the next step for him? Can he keep his job? I guess we’ll find out next week, but it would have been nice to see it unfold rather than just getting Oliver’s remarks to Andy later that Wednesday has been really unkind to him. Also, I’m kind of not recognizing Chris anymore, and it’s bumming me out.

* Traci finds out that Steve has been surveying her ex and, in the process, discovered that Dex is going to an illegal gaming house. Despite the fact that Dex is coming after Traci for spousal support and full custody of their child, Traci warns Dex, leaving things rocky between herself and Steve. When Oliver wants to know why the bust was, well, a bust, Steve takes the blame, replying that he had bad intel and that he thought he knew what he was getting into, but he was wrong. Yes, Traci, that was pointed at you.

* Andy’s “genuinely mad” at Oliver for not having her back with Duncan, but pretending to be fine. It takes Gail of all people to finally get through to her. “Just get over it,” she says. “Oliver loves you. He loves all of us.” So Andy finally confronts Oliver, who assures her, “I’m on your side, Andy. I always have been. I always will be.”

Rookie Blue fans, what do you think of Chris’ downward spiral? Is Andy being too harsh on Oliver? And did you enjoy Gail’s snarky remark to Andy about having something — Nick — in common?