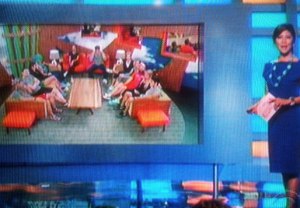 For being an unscripted reality show, Big Brother sure does get formulaic after a while.

Every summer, without fail, there comes a moment when the houseguests’ smooth-sailing strategy gets thrown off course. Suffice to say, Thursday’s double eviction gave us that moment.

Here’s what went down on the fast-paced live broadcast, which sent two houseguests packing by the end of the hour:

* Derrick and Cody — easily the smartest players in the game, who made a silly decision to play both sides of the house this week — inform their fellow houseguests about the plan to evict Zach. It seems to go over like gangbusters, until Caleb questions why Zach — a guaranteed vote for any of the Detonators — should be sent packing over veritable floater Jocasta. In an 11th-hour shake-up, Derrick and Cody decide to upend their shaky alliance with Nicole and Hayden, expose the original plan to backdoor Frankie and set their sights on eliminating Jocasta.

* The events that follow are pretty darn devastating for Nicole and Hayden, who are completely blindsided by Jocasta’s 6-2 eviction. On the flip side, absolutely no one is surprised by Jocasta’s post-eviction interview, where she admits she’s not a fan of the lying and backstabbing that come along with this show. (She and Brittany are now co-chairs of the “People Who Never Should Have Auditioned for Big Brother In the First Place” Club.)

* Caleb wins the following Head of Household competition, draws a line in the sand by nominating Hayden and Donny, then puts up Nicole as a replacement nominee when Donny wins the Power of Veto (and maybe almost has a heart attack after doing so…? Anyone else legitimately concerned about that guy?)

And, in the second eviction of the night, Hayden is sent packing in a 5-2 vote. (Cody and Donny are the only ones who try to oust Nicole.)

Other takeaways from the hour? Hayden only seems soooorta interested in a post-BB relationship with Nicole; Zach is quickly becoming the most obnoxious player in recent memory; and, in an exciting-but-potentially-anticlimactic twist, we learned that Jocasta and Hayden may have a chance at re-entering the game sometime soon. (But Jocasta is only allowed back if she abandons the bowties. Can I get an amen?)

Were you happy to see Jocasta and Hayden leave the house? Which of the nine remaining HGs would you like to see win the whole shebang? Would anyone care if the Team America twist just went away forever? Sound off in the comments!