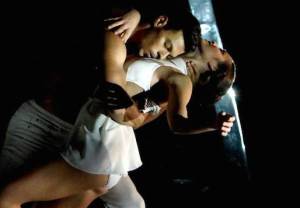 So You Think You Can Dance fans, I have a dilemma.

For much of Wednesday’s Top 10 performance show — which paired each finalist with an All-Star dancer from seasons past — I couldn’t quite decide whether the Top 10 were put at an advantage or disadvantage by dancing with SYTYCD vets.

Take, for example, what I considered tonight’s most entertaining routine: a fun hip-hop number between Jessica Richens and her All-Star companion, Twitch. On her own, Jessica did an excellent job with the fast-paced routine (and started to break away from the idea that she can only excel at jazz and contemporary numbers). But might it be possible that our collective love for Twitch earned Jessica a few accolades she wouldn’t have gotten on her own?

It happened again and again throughout tonight’s broadcast: During Zack and Amy’s show-closing contemporary — which wins tonight’s award for Dance of the Night — my eyes were really going to Amy, instead of her counterpart who’s actually vying for votes. And Emilio Dosal, though certainly impressive in his hip-hop performance, was just slightly overshadowed by his beast of a partner, Jasmine.

Don’t get me wrong; I love when the All-Stars return to the stage. It reminds us of the incredible talent that SYTYCD has produced throughout the years, and it forces the competing finalists to raise their game. But I can’t help wondering if the All-Stars’ presence has us overestimating just how solid the actual competitors are in their routines.

I know, I know — cue the boos from the studio audience. (At least I didn’t call Ricky “The Hobbit”. How rude, Nigel!)

Some other noteworthy observations before we get to the results:

* While Tara Lipinski is still far and away a more qualified guest judge than other celebrities who’ve sat behind that table, she’s the second consecutive one to overuse meaningless praise like, “I can’t with you,” “I die” and “I’m obsessed with [insert dancer/choreographer name here].” Might I suggest Roget’s Thesaurus as an early Christmas gift for her and Christina Applegate?

* Major, major props to Jamal Sims for choreographing a killer opening number. (Set to “Bang Bang,” no less, which has gotten me back into the habit of singing into my hairbrush in front of the mirror.)

* Seriously, Nigel called Ricky “The Hobbit,” and it was appalling.

And now, the awards for tonight’s dances:

DANCE OF THE NIGHT
Zack Everhart and Amy Yakima (Contemporary)

MOST IMPROVED
Emilio Dosal (though his All-Star companion, Jasmine Harper, needed no improvement — in fact, she almost made me think twice about the ice cream I ate while recapping. Almost.)

PERFORMANCE I WANTED TO LOVE, BUT DIDN’T
Ricky Ubeda and Lauren Froderman (Jazz)

As for results, Cat took a new (and incredibly nerve-wracking) approach to revealing tonight’s outcome by telling finalists whether or not they were safe immediately after their performance. (Take a couple steps back, Cat — every finalist is looking over your shoulder at that little white card.)

What did you think of tonight’s performances? Take our poll below to vote for your three favorite routines, then hit the comments with your thoughts on the dancers, Tara Lipinski’s guest-judge appearance and eliminations!