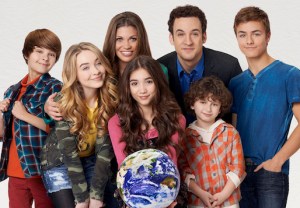 RELATED Phineas and Ferb Will Get Lost

“The series swiftly became a favorite of kids and their parents, many of whom grew up with Boy Meets World,” Disney Channels Worldwide original programming EVP Adam Bonnett said in a statement. “We’re looking forward to watching Riley Matthews and Maya Hart make the world their own, as Cory and Topanga teach them life lessons along the way.”

Production on the comedy’s sophomore run will begin in November.