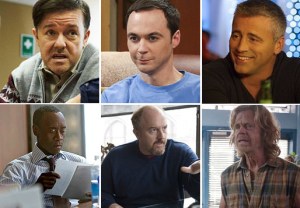 Showtime subscribers will certainly be intrigued by the 2014 Emmy race for Outstanding Lead Actor in a Comedy Series.

RELATED Emmys 2014: Who Should Win Lead Actress in a Comedy? Take Our Poll!

A whopping fifty percent of nominees in the category come from the pay cabler’s darkly comic lineup: Episodes‘ Matt LeBlanc (up for the third time in the last four years, and on his sixth nomination overall); House of Lies‘ Don Cheadle (in the running for the third straight time); and Shameless‘ William H. Macy (scoring his first nod in the category).

To actually claim the big statuette, however, the Showtime trio will need to stop the momentum of The Big Bang Theory‘s Jim Parsons, winner in 2013, 2011 and 2010.

Also in the running? Louie‘s Louis C.K. (up for the fourth consecutive time) and Derek‘s Ricky Gervais (who last graced the category in 2007, when he starred in Extras).