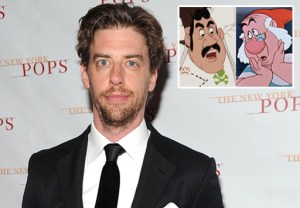 The latest addition to NBC’s Peter Pan Live! is sure to make the production a Smash hit. (Don’t judge the pun. You knew it was coming.)

Christian Borle (Smash) will pull double duty as Mr. Darling (Wendy and the boys’ father) and Smee (Captain Hook’s bumbling assistant), our sister site Deadline reports. This is a bit of a departure from the original Broadway production, in which the actor playing Mr. Darling also took on the role of Captain Hook. In NBC’s Pan, Hook will be played by Christopher Walken.

In addition to Smash, Borle also co-starred in NBC’s production of The Sound of Music, playing Max Detweiler. And no stranger to the pirate’s life, Borle won a Tony Award for his performance as Black Stache in Peter and the Starcatcher.

Does Borle get your stamp of approval? Go on, drop a comment with your thoughts on this latest casting below.