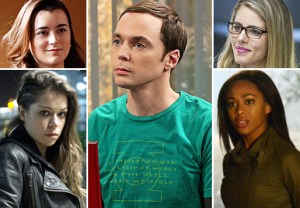 Question: Any info on the Big Bang Theory season premiere? —Joey
Ausiello: For those curious about Sheldon’s whereabouts all summer, I can confirm that he did, in fact, get on that train (vs. just squatting in the station, as some have speculated). The bigger question you should be asking yourself is whether he ever stepped foot outside the train during his epic journey.

Question: Can you tell us anything about this new woman that Tony will meet this season on NCIS? —Mel
Ausiello: As previously reported, the woman due to enter DiNozzo’s life will do so via a case, and as such his dynamic with her will be “completely different” than what he shared with NCIS colleague Ziva David, show boss Gary Glasberg tells us. “The trick will be casting somebody where the chemistry [with Michael Weatherly] is there, but we’re excited about the opportunity,” Glasberg adds. “We’ll give it a shot and see what we can do.”

Question: Please give us scoop on Jude and Connor from The Fosters before Season 2A ends! —Julius
Ausiello: I will do nothing of the sort! Instead, I can offer you fresh details on the major new love interest the show is introducing for — apologies in advance, Jesus — Emma. His name’s Gabe, he will first air in the Season 2B premiere, he’s a charismatic, easy-on-the-eyes Latino student from a rival school, and, last and most importantly, he’s a fellow wrestler. Gabe becomes infatuated with Emma, and he’s not the least bit concerned about a certain ex-factor. (Again, deepest sympathies Jesus.)

Question: In a previous Falling Skies promo, we saw Ben and Maggie kissing. Any news when this is gonna be shown? —JustinAnn
Ausiello: In the time since you sent this in, that “dream” hook-up has already aired. But what if I told you a real lip-lock ‘tween the two was on the horizon…?

Question: Any scoop on 24‘s return? Comic-Con came and went with no announcement. Are we getting more or has Jack Bauer finally run out of time? —Matthew
Ausiello: All signs point to more 24, but probably not until the 2015-16 season at the earliest. Everyone connected with the stellar Live Another Day — namely, Kiefer Sutherland and his fellow EPs — are taking a little breather. Question: Got any Banshee Season 3 scoop you can share? —Hayley
Ausiello: As if the twin threats of Chayton and Proctor weren’t enough to keep Lucas up at night, the Cinemax hit is throwing another antagonist his way. I can exclusively confirm that The Newsroom‘s David Harbour (pictured, right) is joining Season 3 in the recurring role of Dalton, a ghost from Lucas’ past who runs a black ops outfit. He’s been pursuing Lucas for years and, like a good hunter, does not easily abandon his prey.

Question: So I shamelessly binged both Seasons 1 and 2 of Orphan Black last week, and now I’m in Clone Club withdrawl. Got any deets on next season? —Syd
Ausiello: Oh, do I. I’ve been saving my exclusive, überjuicy Comic-Con Q&A with EPs Graeme Manson and John Fawcett for a special occasion, and I think the first Ask Ausiello of August qualifies as such. In the following video, the pair not only (sorta) confirm that trans clone Tony will make a reappearance in Season 3, but they share behind-the-scenes scoop on how Tatiana Maslany was able to perfect the character’s deep, masculine voice (spoiler alert: she had help!). Also, if you’re curious how many Castor clones we will meet in the new season, the following vid has the answer to that, too.

Question: Do you have any Once Upon a Time scoop that isn’t related to the Frozen storyline? —Katia
Ausiello: I think so…? For Season 4’s fourth episode, the ABC series is casting the role of an elderly, grizzled and unflappable knight who for many, many years has dedicated himself to serving a righteous cause. Anyone else getting a Holy Grail vibe from this…?

Question: Any chance we are going to get a Laurel and Felicity friendship on Arrow, now that Laurel knows the secret, instead of some ridiculous catty girl nonsense? —Samantha
Ausiello: EP Marc Guggenheim says that with Laurel now in on everyone’s secret, the dynamic between her and Felicity will be “a lot of fun” — and decidedly not in a catty way. “These characters [including Sara] should all be more than just who they are to Oliver,” Guggenheim notes. “We’re always trying to flesh out Felicity’s character and Laurel’s character and Sara’s character beyond whether or not they’re going out with Oliver that week.” Question: What can you tell me about the Season 6 premiere of Parenthood? I am dying to now. —Daniel
Ausiello: The dude to the right is the latest obstacle facing Joel and Julia. Actor’s name is Coby Ryan McLaughlin. Character’s name is Chris. He’s Julia’s ex-boyfriend from law school. He’s also her new colleague. THIS ISN’T GOING TO END WELL!!!

Question: Do you have anything juicy on Bones you can share? —Cassidy
Ausiello: The Hodgins-Angela relationship will continue to be the show’s “emotional rock,” but they won’t be without their challenges, previews EP Stephen Nathan. “Life won’t be easy for them,” he continues. “Angela’s still pulled in two directions — working [at the Jeffersonian] and being with Hodgins. I think there’s a sense for all the characters that their lives might have other demands for them. People are going to be changing and wanting different things — as would be the case with any group of people you’ve known for 10 years.”

Question: Any cool Crane-Abbie moments coming up on Sleepy Hollow? —Jeff
Ausiello: I haven’t seen the Season 2 premiere yet, but exec producer Mark Goffman promises the Sept. 22 opener contains a “pretty shocking moment in purgatory” between the two, adding, “I don’t think anyone’s going to see it coming.”

Question: Any Danny and Mindy-related Mindy Project scoop? Love them together! —Elaine
Ausiello: If their romance crashes and burns, they’ll only have each other to blame. “The primary difficulty between the two characters is how different they are,” previews exec producer Matt Warburton. “Every little issue — like the fact that Mindy can’t keep a tube of toothpaste in Danny’s house without him being bothered by it — will be the primary driver of story, at least for the time being. We know the characters love each other, so introducing a lot of people from the outside just to upset that would feel phony. Our motive in the beginning is just, ‘What makes it impossible for these two people, who love each other, to get along?'”

Question: I don’t care about Hayley and Elijah on The Originals. I want to know about Mikael and Esther! What’s that crazy couple up to in Season 2? —Ashleigh
Ausiello: Funny you should refer to them as a couple, Ashleigh, as their relationship is going to be explored big-time in the coming season. “We know about their marriage, and we know that they made their kids into vampires, but do they like each other?” executive producer Julie Plec muses. “Do they hate each other? We’re having so much fun writing the history of Esther and Mikael right now.” Sounds like their future is just as mysterious as their past.

Question: Just wondering if I can get any spoilers on season 2 of Reign. Especially if any of those spoilers feature Francis. — Michelle
Ausiello: I hope you like demons, Michelle, because Francis has plenty of ’em. “When Henry died, he talked about what it was like to take a life — it’s a big weight you carry with you,” executive producer Laurie McCarthy says. “One of the things you’re going to see this season is that Francis is carrying that weight; he’s carrying that guilt from killing his father. It was a justified killing, but a killing nonetheless.”