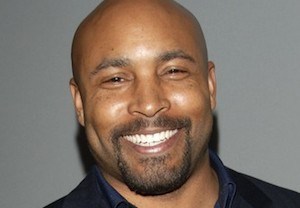 Another sign Sons of Anarchy‘s final season will be a deadly one: The show is adding a Six Feet Under alum to the cast!

He’ll play Moses, the head of a security team who takes care of business on the street. He’ll first appear in Episode 7.

St. Patrick (who was among the 25 actors we want back on TV now) joins a growing Season 7 guest cast that also includes Marilyn Manson, Courtney Love, Annabeth Gish and Lea Michele.

SOA returns Tuesday, Sept. 9 with a super-sized premiere. The action picks up 10 days after Tara’s brutal murder and finds Jax in jail on a parole violation, reeling from the loss of his wife.

“He’s obviously very sad and vulnerable and kind of broken, but there’s a huge amount of vengeance and anger in his heart,” Charlie Hunnam recently said of his alter ego. “The way all of that is processing, at least in the very beginning, is [starting] to have a numbing effect. He knows what he wants to do, and that’s where all of his energy is going to go.”