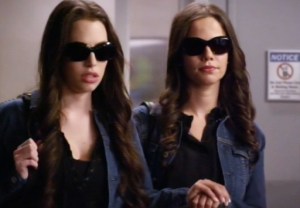 What’s more terrifying than one Jenna? How about two of ’em? Pretty Little Liars served up a double dose of blind-and-crazy on Tuesday’s episode, as Sydney officially pledged her allegiance to the United States of Jenna.

Spencer bumped into the dastardly duo during her ophthalmology appointment — she was actually sporting a version of “The Jenna” look, herself — and things got real tense. During a post-appointment chat, Sydney told Emily that everything she’s done has been to help Jenna “feel safe” around Alison, then fed Emily some sob story about how she never expected to like her.

But is Emily about to take Sydney’s crap lying down? No, sir. She got herself a new job as a swim coach to keep an eye on Sydney, a fact she made clear during their roadside confrontation. She even took a cue from pro-drowner Paige, telling Sydney, “I want to see you underwater.”

(Apologies to Team Paily, but that reference was just too good to pass up.) INSURANCE FRAUD | Noel Kahn returned to PLL in a big way this week, as the girls discovered he has pictures of Alison during the time she was supposedly in captivity. Spencer volunteered to snoop around and see what else he was hiding, but she didn’t count on him showing up to confront her. In an attempt to defend herself, she slashed Noel’s hand with a fire-poker, which really looked like it hurt — but I think we can all agree he’s lucky she didn’t aim for the money maker. (And by “money maker,” I obviously mean his phenomenal set of eyebrows.) ZACK ATTACK | Speaking of people getting what they deserve, Caleb (and his fists of brooding fury) confronted Zack after Hanna revealed what went down between them last week. Aria also took a leap of faith and told her mom about Hanna’s accusations, and sadly, it wasn’t the first time Ella’s fiancé has been in this situation. Needless to say, the wedding was called off and poor Ella ended up devastated. Of course, there were a few good things to come out of it: not only did Hanna and Aria make up after last week’s blow-out fight, but Byron — who does exist, despite going unseen for months at a time — also got to share a nice scene with Ella. (Could there be hope for those two, after all?) FALSE CONFESSION | In true Pretty Little Liars fashion, the biggest twist was saved for last: A man was brought into the Rosewood Police Station for questioning, and he confessed to kidnapping Alison. In fact, his confession matched Ali’s bogus story perfectly, which we later learned is because the guy — who looks like an evil version of Happy Endings‘ Zachary Knighton — is working for, you guessed it, “A.”

OK, your turn to talk: What are Jenna and Sydney up to now? Is there still hope for Aria’s parents to reunite? And was anyone else concerned about the safety of Noel’s brows? Drop a comment with your thoughts and theories below. 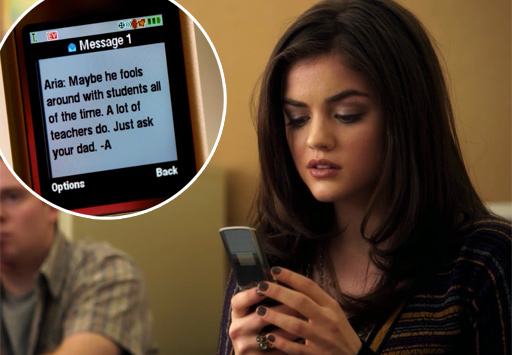