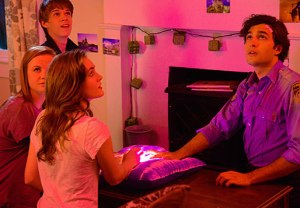 CBS certainly did take us Under the Dome on Monday’s episode of the sci-fi drama. Like, waaaaay under the dome.

As Barbie and Sam spent the hour investigating an underground tunnel (and swapping some seriously dark secrets), we also learned quite a bit about the rest of the gang in Chester’s Mill.

Let’s revisit the finer points of “In the Dark,” shall we?

TWO WRONGS DON’T MAKE A RIGHT | Newly minted sheriff Barbie — who, sadly, isn’t wearing the uniform — is called to the high school to look into a tunnel that leads far, far below the locker where Angie was killed. Sam, Barbie and Junior go underground in pursuit of Lyle, but all they find is Pauline’s old journal — which, of course, is blocked by a trip wire that blows up the tunnel and caves the men in with fallen rocks. Junior is pushed out of harm’s way in time, but Barbie and Sam are left behind to see just how deep the tunnel goes.

The endeavor is tense, to say the least, as Barbie and Sam have a “Who here is less trustworthy?” contest throughout the hour. Even when the two men split up to search the tunnel in opposite directions, they suspiciously meet up again moments later, and happen upon a cliff that leads way, way down — so far down, in fact, that they can’t even hear a rock land at the bottom of the cavern. With nowhere to turn, Barbie and Sam swap horror stories about their pasts: Barbie confesses to having killed “a lot of people” (though he fails to mention one of them was Julia’s husband), and Sam confesses that Lyle was the one to push Melanie in a ditch back in ’88, after the shimmering egg they found in the woods caused Pauline pain.

Their weird, backwards bonding moment is short-lived, of course. After Barbie spies the scratches on Sam’s chest, Sam admits he killed Angie in the hopes of eliminating The Four Hands — good band name, no? — and bringing down the dome. But Sam can’t bear to live under the dome’s thumb for another second, and he leaves Pauline’s prophetic journal to Barbie — insisting that Barbie will ultimately need to kill the other three teenagers — before swan-diving off the edge of the cliff. (Side note: If Mike Vogel and Eddie Cahill want to team up again in the future, I would so watch a buddy-cop comedy starring the two of them. Imagine the deadpan jokes!)

FROM DUST ‘TIL DAWN | Meanwhile, Mother Nature’s latest practical joke in Chester’s Mill is a dust storm, which threatens to suffocate everyone in town. Big Jim, indignant that Julia is compromising his authority, gets the town together to hoist a windmill and disperse water through the air, which ultimately clears the dust in a matter of minutes. But, in true Big Jim fashion, he’s willing to let Joe’s skateboarder friend Ben barely survive an asthma attack first, just to make a point. Stay classy, Big Jim.

Elsewhere, Julia and Rebecca create an explosive device that will clear the fallen rocks from the tunnel’s entrance. As they work, Rebecca explains that her father’s illness prompted her to become a science teacher in the first place, and her cold, icy heart seems to melt juuuuust a little. (And, in a nice girl-power moment, the ladies do successfully blow away the rocks, allowing Julia to reunite with her man.)

EGG-CELLENT TIMING | After Junior narrowly escapes the tunnel’s cave-in, he warns Melanie that they’re in danger of being killed, as are Norrie and Joe. The four teenagers agree to pursue whatever destiny the dome has in store for them, so they head to the lake where Julia threw The Egg last season. After summoning the egg out of the water (with the power of their hands!), they return to Joe’s house (or is it Angie’s?) and place their hands on the egg, which turns the whole living space… into a nightclub! Actually, it’s just more pink stars, which shimmer and fall around the foursome as the glittering outline of a building — the same one that Junior spied in a snow globe of Zenith — appears in the air before them.

OK, your turn. What did you think of the episode? Do you think Sam is really dead? And were you happy to see Norrie and Joe rekindle their (two-week-old) flame? Sound off in the comments!