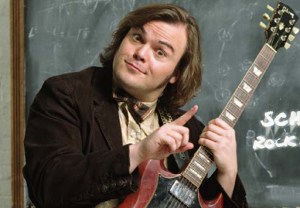 Nickelodeon is going back to school.

The network has ordered 13 episodes of a live-action series based on Paramount Pictures’ 2003 Jack Black movie School of Rock, TVLine has confirmed.

Following the film’s blueprint, the comedy will tell the story of garage-rocker Dewey Finn, who poses as a substitute teacher at a prestigious private school, eventually teaching his students — you guessed it — how to rock.

RELATED Legend of Korra Is Moving Online, But ‘There Is Definitely a Book 4’

Though no casting has been announced, it’s fun to note that former Nickelodeon queen Miranda Cosgrove (Drake & Josh, iCarly) was one of the movie’s leading ladies.

The School of Rock series is expected to begin filming this fall for a Spring 2015 premiere. News of the series — which marks the first partnership between Nickelodeon and Paramount Television — was originally reported by The Hollywood Reporter.

Any casting suggestions? Be sure to drop them in the comments section below.