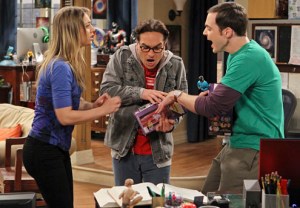 After protracted negotiations that pushed back the show’s Season 8 start date until Wednesday, the trio have agreed to new three-year contracts worth $1 million an episode, per Deadline. (That’s up from the $300K-an-episode they had been earning.) When all the perks are factored in — including signing bonuses and back-end fees — the actors will likely pocket north of $90 million over the three years.

With Parsons, Galecki and Cuoco on board, and co-stars Melissa Rauch and Mayim Bialik already signed, all eyes turn to Simon Helberg and Kunal Nayyar (who are currently fetching $125 and $75K per episode, respectively). The pair remain in active talks are are expected to close new pacts today or, at the latest, tomorrow.

Back in March, CBS renewed Big Bang for three more seasons — through May 2017 — contingent on the cast’s contracts staying current. According to Deadline, the actors’ new contracts leave open the possibility of an 11th season.