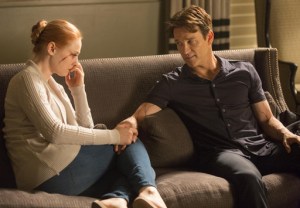 A main goal of True Blood‘s final season has been to return the series to its roots, and with only four hours left until the grand finale, Sunday’s episode provided the biggest throwback yet — especially for long-suffering fans of Beell and Sookeh.

Proving that she really didn’t care about Alcide — at least not nearly as much as she claimed — Sookie rushed to Chez Compton, clad in naught but a short nightgown, and ended the episode with a good old-fashioned hump sesh by the fireplace. It was a reunion we all knew was inevitable, and I definitely enjoyed the delicious Season 1 undertones, but I honestly didn’t expect Sookie and Bill to go all in (tee hee!) so quickly. Considering her ex-boyfriend’s body is barely even cold yet, I think a kiss would have been enough to whet the appetites of thirsty Bill-Sookie shippers.

(“But at least we got a few more flashbacks to Bill’s youth,” said absolutely no one.)

The return of Sookie’s fairie grandfather Niall was also unexpected — we’re all trying to forget Season 6, am I right? — but I suppose it was a necessary part of Sookie’s journey. She needed to hear that nothing could be done to save Bill, for it was his allegedly imminent death that inspired all the humping. (And what would True Blood be without all the humping?)

NU BLOOD | Of course, the most unfortunate aspect of Bill’s condition, at least from a viewer’s perspective, is that the existence of a cure kind of kills all the suspense. Following Eric’s interrogation of Amber, which ended abruptly when he decided to stake her, his new “cowboy” “friend” — which needs double air quotes, because neither are really true — turned to more effective methods of tracking down Sarah Newlin (aka “Numi”). It’s all part of his brilliant plan to mass-produce Nu Blood, a Hep-V antidote made by synthesizing Numi’s miracle blood. Naturally, he intends to make Eric the spokesperson (possibly because he saw how well it worked for Calvin Klein). CASE OF THE EXES | Speaking of Numi, the former Mrs. Newlin had herself a full-on mental breakdown this week, which reunited her with the most important men in her life — including gay ex-husband Steve and headless ex-lover Governor Burrell. It also gave Jason an excuse to recreate his iconic football look from Season 2. (I call it “iconic” because it’s one of the first results when you Google “Ryan Kwanten,” which I have done. Many, many times.) It wasn’t all fun and games, though, as the men of Numi’s past were merely appearing to warn her about her impending death… but that’s really her problem, not ours.

CRAZY SEXY GHOUL | I’d love to sit Violet down and ask about her end-game plan, because I have no idea what her crazy ass is really up to. Temporarily forgetting her vendetta against Jason and Jessica, Violet spent the episode teaching Adilyn and Wade how to do weird sex stuff — “When I was your age, I used to f—k my brother, too,” she reassured them, as she unveiled a bevy of nipple clamps and dildos — before eventually lashing out against the young lovers. (Here’s my question: If Violet wanted to lure Jessica into a trap, why didn’t she just attack Adilyn last week? Am I missing something, or is Violet just that cracked out?) DANCES WITH VAMPIRES | On a happier note, Arlene finally got her freak on with Keith this week, even if it was just in a dream. (Side note: Riley Smith told TVLine that the pool-table sex scene took 16 hours to film, a real rough day at the office.) But when Keith finally appeared at Bellefleur’s in real life, Arlene pushed him away, telling him that she’s Hep-V positive. “Let’s just dance,” he replied, so they did, and it was nice. (Question, though: Does Arlene actually have Hep-V, or did she just say that because she didn’t want to have sex with Keith? For being a total nut job, Arlene’s got a surprisingly steady poker face, so I couldn’t tell.)

THREE’S COMPANY | Hoyt’s return to Bon Temps was also a highlight of this week’s episode — and not just because it gave viewers yet another look at Jason in his skivvies. It was really nice to see Hoyt back in town, and back with his best friend, even if he still has no idea who Jason really is. Hoyt’s girlfriend seemed suspiciously into Jason, though; do we think that’s going to continue next week, or was it just a one-off moment of weirdness?

Truebies, did you enjoy Bill and Sookie’s roll the hay? What do you think Violet is up to? And what’s the deal with Hoyt’s girlfriend? Watch TVLine’s interview with Stephen Moyer below, then drop a comment with your thoughts on this week’s episode.