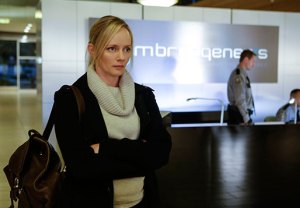 There isn’t anything The Lottery‘s Dr. Alison Lennon won’t do for her research — including getting tortured. And Marley Shelton tells TVLine that it’s only going to get harder for the good doc this Sunday (on Lifetime, 10/9c).

RELATED Poll: Did The Lottery Deliver?

TVLINE | In the premiere, Alison agreed to cooperate with Vanessa. What does that mean for her and her research?
The good news is it gives her some protection from Darius and other sinister forces, but it also means that she has that branch of government breathing down her neck all the time, watching her sort of in a Big Brother-esque way. She more or less has to become the face of the lottery and it makes her have to do things that she’s just not comfortable with as a scientist who is, for lack of a better word, sort of a recluse.

TVLINE | Since Alison doesn’t seem to have the greatest social skills, how does that affect her interactions with the public?
One of her flaws is that she’s a loner and she’s not that socially adept. She lives in her lab and lives and breathes science; that’s where she feels safe. Now she’s thrust into the spotlight and having to be the spokesperson for the lottery, which she’s already dubious about… It becomes a pressure cooker for her, because not only is she not used to that or necessarily comfortable with it, but she also is having to say things that are half-true. Her professional credibility and morality are at stake.

TVLINE | Because James doesn’t know that Alison agreed to Vanessa’s deal to protect him, how will that affect her relationship with him? It seems like he has feelings for her. The dynamic between Alison and James is very interesting. They have a history. They’re, especially from her end, almost like brother and sister. James is the one that she will let down her guard with and she’ll get angry at or let it all kind of hang out with more. That’s because he also speaks the language of science, and they’re in this together. She’s really protective [of him]. It’s a little unrequited as you start to see. He has deeper feelings for her, and as the show goes on we explore that more.

TVLINE | What about Vanessa? Will Alison be able to trust her again? It seems like she was really trying to do a good thing.
That is a major crux of the relationship between Vanessa and Alison: Will they or will they not be able to trust each other? A lot of the dramatic tension has to do with that, and it definitely heats up and the stakes get higher. They’re going to be in situations where they’re going to be forced to take that leap of faith with each other.

TVLINE | With all the donor data wiped out, will Alison take it upon herself to go looking for Kyle, or is she going to remain in the lab?
She and Kyle will definitely intersect. It’s imperative for her to get to him because he’s the only known sperm donor. She’s on a manhunt for him for her own reasons.