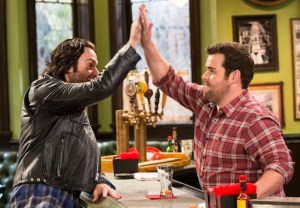 Exactly four weeks after NBC aired the final episodes of Undateable‘s first season, its star and executive producer took to Twitter with some very good news: Danny and the gang are coming back for a second season.

Chris D’Elia was the first to share the comedy’s Season 2 renewal, which TVLine has confirmed:

Executive producer Bill Lawrence quickly followed that up with his own version of the good news:

Undateable premiered outside of May sweeps to 3.8 million total viewers and a 1.3 demo rating, marking the best-rated summer comedy launch for any Big 4 network in five years. In a recent TVLine poll, 87 percent voted in favor of renewal.

This marks the second new NBC summer series to earn a renewal, following the medical drama The Night Shift.

But will D’Elia’s Danny really get a spaceship in Season 2? We’ll just have to wait and find out. Until then, SLOW-MOTION CELEBRATION!
http://youtu.be/GlFoiPcFaQM?t=18s