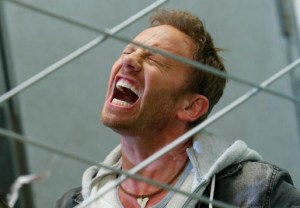 It appears the sharks weren’t the only ones who came back for seconds.

Syfy’s Sharknado 2: The Second One on Wednesday night sucked 3.9 million total viewers into its vortex — making it the cabler’s most watched original movie ever — with 1.6 mil landing in the extra-tasty 18-49 demo, up 180 percent versus the original telepic.

TVLine readers gave the over-the-top follow-up an average grade of “B+.”

Syfy ordered a third Sharknado film back in April, three months ahead of The Second One’s premiere.