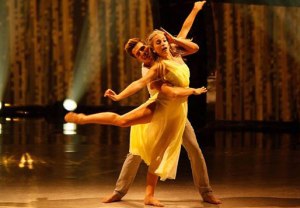 How can I adequately express my feelings about So You Think You Can Dance‘s Top 14 performance show? Allow me to take a cue from Paramore’s Hayley Williams: “After all this time, I’m still into you.”

Okay, okay, I realize that’s cheesy. But let’s face it: During the 120 minutes allotted for Wednesday’s episode, it was hard not to be legitimately frustrated that this gem of a reality competition series so often flies under the radar, when even in its 11th season, performers are still earning three-judge standing O’s (and millions from viewers’ living rooms, too).

In no particular order, tonight’s episode brought a looming sense of dread (when we were reminded that four dancers would be axed by night’s end, instead of the usual two); major excitement when the Bottom Six contestants were once again able to dance for their lives; and not one, but two routines that brought the judges — and me — to tears. (*)

(* The all-girls routine choreographed by Mandy Moore was particularly moving — yes, mostly because of those gorgeous dancers on stage, but let’s also give credit to Evanescence’s “My Immortal.” You all know that was the jam in 2000, at least when you needed a good cry.)

RELATED  TVLine Mixtape: Your Favorite Songs From So You Think You Can Dance, PLL, Finding Carter and More

And, let’s not forget the immense satisfaction of Christina Applegate’s return to the judges’ panel, where she offered excellent constructive criticism and fangirled right along with the rest of us. Much like my vacationing colleague/your usual SYTYCD recapper Mr. Slezak — who, you may have noticed by now, I am not — I’m still petitioning for Misty Copeland to permanently fill that third judges’ chair, but anything is better than Jason Deruuuuloooo telling me to wiggle, wiggle, wiggle my big, fat butt. (I will not, thank you very much.)

And thus concludes my gushing for the evening. Let’s get to the awards for tonight’s dances:

DANCE OF THE NIGHT
Jessica Richens and Casey Askew (Contemporary)

I’m truly bummed for the four contestants that were sent packing tonight, but after Casey and Jessica’s stunning contemporary routine, sending those two home would have been nothing short of tragic.

What did you think of tonight’s performances? Take our poll below to vote for your three favorite routines, then hit the comments with your thoughts on the dancers, Christina Applegate’s return to the judges’ panel and eliminations!