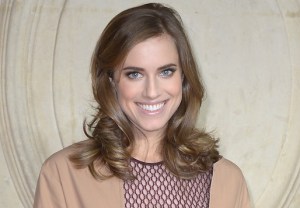 The live musical will be broadcast on Thursday, Dec. 4.

“We couldn’t be happier that Allison Williams is our Peter Pan,” NBC Entertainment chairman Robert Greenblatt said in a statement. “She’s a lovely rising star on the award-winning show Girls — where she occasionally shows off her incredible vocal talent — and we think she will bring the perfect blend of ‘boyish’ vulnerability and bravado to save the day against Christopher Walken’s powerful Captain Hook.”

Said Williams of her high-flying role: “I have wanted to play Peter Pan since I was about three years old, so this is a dream come true.

“And besides,” she added, “what could go wrong in a live televised production with simultaneous flying, sword fighting and singing?”

UPDATE: Williams later shared on Instagram a photo of her young self as Pan: