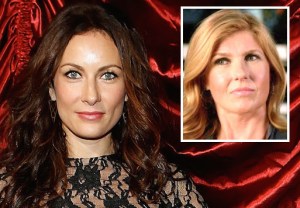 Tony Award winner Laura Benanti is lending her pipes to ABC’s Nashville for its upcoming third season, but can the country music capital of the world handle another diva duel?

The former Go On star will recur for several episodes as Sadie Stone, an up-and-coming artist in the country music biz, our sister site Deadline reports. Though Sadie supposedly “befriends” Rayna in Season 3, we all know what that really means: brace for conflict!

To be fair, it’s entirely possible that Rayna and Sadie will hit it off swimmingly without a hint of ill will between them; it’s just much more likely that Rayna will choose Luke over Deacon, then get second thoughts when Deacon starts cozying up to Sadie. (Come on, it’s the Nashville way!)

Regardless of how the actresses’ on-screen relationship turns out, Connie Britton is clearly thrilled to have Benanti on board:

In addition to Go On, Benanti’s TV credits include roles on Nurse Jackie, Law & Order: SVU and Royal Pains.

The third season of Nashville premieres Wednesday, Sept. 24, on ABC.

Nashville fans, how do you think Sadie will factor into Rayna’s world? Drop a comment with your Season 3 theories below.