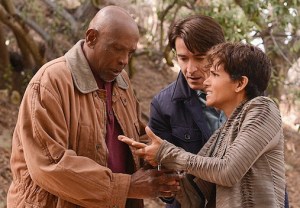 Molly, John and Ethan have an island getaway in this week’s Extant, but sadly, it is not the all-inclusive respite they so sorely need. Instead of quaffing daiquiris and listening to Jimmy Buffett tunes, Molly loses one kid and undergoes involuntary surgery that (probably?) removes the other.

Read on as we review the major developments in “Shelter.”

FAMILY VACATION | Molly, John and Ethan ditch their car in a parking lot and charter a boat over to the island where Molly’s estranged father, Quinn, lives. Their plan: Hide out and take a day to determine the baby’s DNA themselves (because astronauts and robotics specialists can just do that?), then proceed from there. But the moment John starts taking a blood sample from his wife’s arm, Faux-cus appears to her and creepily begs, “Don’t let me go.” For once, Molls immediately tells John exactly what’s freaking her out, and he reassures her it’s just a hallucination.

‘TIME IS RUNNING OUT’ | Meanwhile, back at ISEA, Yasumoto’s very bad day begins when he learns that experiments involving the “life-sustaining” goo he’s been working on – and in which he was submerged in the pilot – aren’t going so well. “Time is running out,” he says vaguely/ominously to Director Sparks, who spends the rest of the episode threatening Sam into silence about Molly’s pregnancy (he threatens her mentally imbalanced brother) and putting out a cyber hit on Ethan.

RELATED CBS’ Fall Schedule Kicks Off With Thursday Night Football; Two and a Half Men, Elementary to Premiere in Late October

ETHAN’S MISSING… AGAIN | Speaking of the unsettling little toaster, he bonds with his slightly shifty, recovering alcoholic of a grandfather as the pair skip rocks on the beach. A passerby stops to admire Ethan’s throwing arm, and the guy is so menacing without even trying that there is absolutely no way he’s not an ISEA agent. I mean it’s possible that normal men stand, arms crossed over overdeveloped pecs, and glare evilly at a young child. It’s just not likely.

Grampa Quinn decides to use his android grandson for profit by using him to win bar bets – which is so successful Quinn takes a celebratory shot, thereby falling off the wagon – until Ethan takes the “nobody’s perfect” concept to heart and deliberately throws the game. Quinn turns abusive on the way home and, while he’s out of the car for a moment, an ISEA team swoops in and nabs Ethan.

Molly and John, who are apoplectic when they realize what’s happened, split up to find their son. John manages to get himself arrested when he punches the officer who refuses to search for a non-human (Side note: How come the cop seemed so in the dark in one breath and then declared himself well-informed about androids in the next?) So it’s left to Molly to locate the cuddly little humanich, who’s been deactivated – possibly permanently – by the men in black. When she finds him and picks him up, a helicopter swirls in over them, and the visual makes me miss The X-Files all over again.

SHIP OUTTA LUCK | Molly wakes up, groggy, on some kind of ship. The alien baby is kicking up its usual circles on her belly; it also seems like the spawn gives her the ability to move objects without touching them. That’s how she grabs a nearby hypodermic, stabs it into the neck of one of the biohazard-suited men working on her and then escape from the room. Unfortunately for Molly, she runs directly into an ominous operating room we saw earlier in the episode.

Yasumoto is there, and he watches as Molly is strapped to the table and a laser begins cutting into her abdomen. Hasta la vista, Faux-cus Jr.?

Now it’s your turn. Did you feel like the episode lagged a bit? Didn’t it seem like Louis Gossett Jr. swallowed nearly half of his lines? And were you as surprised as I was that you felt a little bad when Ethan got zapped? Sound off in the comments!