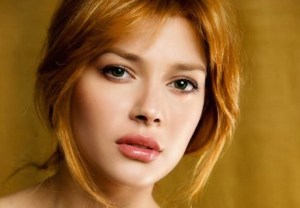 Agents of SH.I.E.L.D.‘s Asgardian temptress will next be working her wiles on ABC’s Revenge.

TVLine has learned that Sochi-raised Elena Satine has been cast in the recurring role of Louise, the “black sheep” daughter of a wealthy Southern family. Louise is described as “slightly unhinged,” though she has only the best of intentions (within the context of her own warped logic).

Further details on her storyline are under wraps, but I can tell you that she does meet one of the major characters under “interesting” circumstances.

In addition to her turn as S.H.I.E.L.D.‘s Lorelei, Satine’s previous TV credits include a run on Magic City, NCIS and Smallville (as Aquaman’s wife Mera).