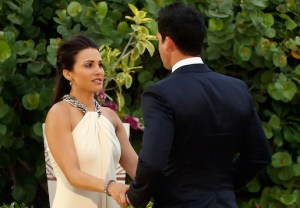 Bolstered by an original lead-in, NBC’s American Ninja Warrior this Monday drew 5.8 million total viewers and a 2.1 rating, rising two tenths in the demo to win the night, hit a two-year high and edge out The Bachelorette from 9 to 11 pm.

Opening NBC’s night, Running Wild With Bear Grylls debuted to 4.6 mil and a 1.4, making it this summer’s No. 2 reality launch (trailing ABC’s Rising Star by a tenth in the demo).

RELATED Bachelorette Finale: Who ‘Won’? Who Wept? Who Blabbed a Sex Secret?

THE CW | Coverage of the Young Hollywood Awards drew 780,000 total viewers and a 0.3 rating, dipping in eyeballs while steady in the demo versus last year.