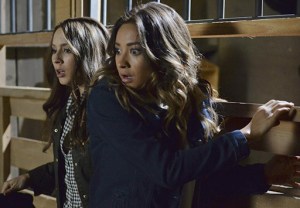 Thanks to Tuesday’s Pretty Little Liars, we can officially add “horses” to our growing list of terrifying creatures not to be trusted.

Emily and Spencer nearly came face-to-hoof with one such beast during a fact-finding mission to Bethany’s stable, though Spencer’s injured eye will likely heal faster than Aria and Hanna’s fractured friendship.

Confused? Read on, as we recap all of this week’s Rosewood drama… BAD VIBRATIONS | It’s official: Ella has terrible taste in men. During a drunken sandwich run to the Brew, Hanna got all kinds of felt up by her fiancé Zack, but because she’d downed half a bottle of whiskey at the time, her friends assumed she “misinterpreted” the situation. She returned to the Brew the next night to validate her suspicions, at which point Zack felt her up again and gave her his number. But the worst part was Aria’s reaction; she basically called Hanna a slut and blamed her for everything bad going on in their lives. (For the record, I feel like I’ve seen this Lifetime movie before, and it did not end well.)

PONY UP | Meanwhile, Aria spent some time with her new bestie “Big Rhonda,” who revealed that Mrs. DiLaurentis signed Bethany out of Radley several times, and even bought her expensive presents — including a pony. (Sounds like the kind of gift a mother might give to her daughter. There’s no way the twin theory is off the table.) A trip to the stable revealed a few more clues, including a riding helmet with Melissa’s initials, but a thunderstorm threw (or, rather, kicked) a wrench in the girls’ investigation. Seriously, remind me never to go within 20 feet of a horse ever again. ALI GOES ROGUE | With her dad out of town, Alison crashed at Chez Marin, where she (unintentionally?) filled the Hanna-shaped hole in Ashley’s life. They even planned a faux-mother/daughter dinner, but an unexpected visit from a knife-wielding stranger put a bit of a damper on their evening. Only it wasn’t unexpected, and it wasn’t a stranger; it was Noel Kahn, and Alison orchestrated the entire break-in herself. She apparently wanted “someone like Hanna’s mom” to stop doubting that a killer is after her, but methinks that little stunt will only serve to push her friends further away.

* At first, I had no idea why the girls were singing “What Child Is This?” during choir practice — heck, I didn’t even know they were in choir — but then I remembered we’ve got a Christmas special fast approaching.

* Anyone else excited to see Toby in uniform? (“What seems to be the problem, Officer Cavanaugh?”)

* Do we think Sydney is as creepy as she seems, or are we purposely being misled? True villains in Rosewood tend to be smarter than she is.

Liars, are you as terrified of horses as I am now? And do you think Ella will go through with the wedding? Drop a comment with your thoughts on this week’s episode below.