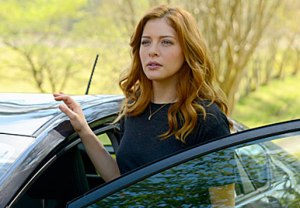 True story: Last week, a fellow member of Team TVLine — who hadn’t seen Under the Dome in a while — asked me what Julia has been up to since Season 2 began.

Embarrassingly, I had no answer. I believe my exact words were, “Uh… she’s just there… being herself?” And while this exchange did highlight how much I need to work on my social skills, it also made me realize how little Julia has been utilized since she was deemed “the monarch” at the end of Season 1.

That’s why — even though Julia’s monarch status remains more or less a mystery — it was especially nice to see Ms. Shumway leading Chester’s Mill through its latest crisis on Monday’s episode.

FOLLOW THE LEADER | In the wake of Big Jim and Rebecca’s thwarted attempt to infect the town’s water supply, Julia tries to get Chester’s Mill residents on board with a voluntary food sharing program. If everyone shares resources, the town can surely survive for a while longer — and there may or may not be some “Kumbaya” choruses sung in the meantime. But when Julia suggests the food program while arraigning Big Jim and Rebecca in the middle of town, a massive fight breaks out — only to be stopped when newly appointed sheriff Phil shoots and kills Wendell, a civilian who isn’t down with Big Jim trying to poison the whole town.

And if your Spidey sense has been telling you that Phil is up to no good, it doesn’t take long for those suspicions to be confirmed. Later, when a sudden explosion sets the town’s food pantry ablaze, Phil blames the ordeal on Julia, then slips off to a storage unit full of food that he’s been keeping a secret. Norrie’s mom Carolyn — who is back, somehow! — spies the secret pantry, and after Phil tussles with her, Barbie guns him down. (Yes!) Ultimately, the town’s food crisis is solved by Sweetbriar Rose employee Andrea, who inherited tons of food from her late survivalist husband and can comfortably feed Chester’s Mill for months. Cue Julia and Barbie making up — and making out — for the first time in weeks.

BLOODY HELL | In an attempt to learn more about Melanie’s past, Joe and Norrie take her to the dome’s edge so she can place a hand on the surface — to no avail. No visions, no electric shocks, nada. Tensions run high between the three teenagers, and when Joe runs off to comfort a conflicted Melanie, the two share a kiss. (Oh no he diiiidn’t!) Joe later tries to apologize to Norrie, telling her he loves her, but she’s having none of it. Fortunately, the trio do have an interesting hunch: They each take a blood sample, hoping that Melanie’s blood will reveal something, anything, about how and why she came back from the dead.

DRAWING A BLANK | When Sam finds Junior ransacking his cabin, Junior informs his uncle that Pauline is still alive. Plus, after they find an old drawing of Pauline’s that depicts four hands touching the dome, Junior suggests that all four hands need to be killed in order to bring the dome down — which explains why Angie was offed. “Who are the other three hands?” Sam asks. “Well, golly gee, it’s me, Joe and Norrie,” Junior easily offers up to his shady uncle. Naturally, Sam gets Junior drunk and nearly smothers him with a pillow, but he can’t quite go through with the deed. Yet.

Later, Sam and Junior find a hidden drawing of Pauline’s that brings them back to Melanie’s locker. Upon breaking it open, they find it leads to a tunnel — one that Lyle has likely used to get far, far away from the crazies of Chester’s Mill.

That leaves us with the usual parting questions: Has a TV character ever shown up more sporadically than Norrie’s mom? Despite their teenage drama, might Joe and Norrie be the smartest and most refreshingly honest people in town? Is Rebecca becoming — gasp — somewhat likable? And most importantly: What did you think of the episode? Hit the comments!