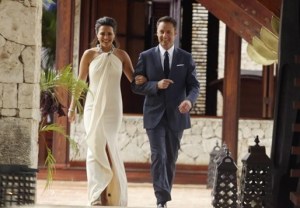 The choice wasn’t easy: Handsome lugnut with laborador enthusiasm and the conversational depth of a self-service supermarket checkout machine or smarmy-but-smart goofball with unfortunate hair-helmet issues.

One thing was certain as The Bachelorette: A District Attorney Sacrifices Her Professional Credibility for Love (or Its TV Equivalent) came to an end tonight: No way was Andi Dorfman going to opt for “None of the Above.”

Chances are you staunchly refused to tune in, and TVLine supports your decision. But if you wish to maintain pop-cultural literacy at weekend BBQs, here are the “results” of tonight’s Bachelorette finale (in three succinct bullet points):

RELATED Castle‘s Nathan Fillion Asks: ‘How Much Longer Can We Make People Wait for a Wedding?’

* Andi “says goodbye” to Nick (aka wraps their relationship in clear plastic and quietly hurls it into a back-alley Dumpster) the morning of her final rose ceremony. “I woke up so confident — just because of us,” says Nick, shattered. And then, because his nickname is Obnox McSmugenstein and because  he has always misunderstood the fact that he was one of 25 suitors this season, he adds, “Sometimes I think you took it too far.” Pressed for deets, Nick reminds Andi that when he told her he loved her when they were “in the water,” she’d said she “wished she could say things back.” Oh well, that’s the way the ABC script goes, fella. Maybe she wanted to say, “I’m in love with Josh, but my contract requires me to string along a second dude ’til the end of the season.” We leave Nick pensively clutching a railing, wondering if he’s destined for Bachelor in Paradise or if he’ll get the real prize — scoring the title of ABC’s next Bachelor. (Personally, I’ve always wanted Coach Brian or Farmer Chris.)

* Andi dries her tears, dries Nick’s tears from her shoulder, and then decides that Josh (aka “Handsome Lugnut”) is the only suitable rose in the Bachelorette bouquet. Josh turns up at the beachside ceremonial altar and gives a speech about sacrificing his “first love, baseball” to find a greater love — “that love that you read in books, that love that people sing in songs” — and then tearfully tells Andi she’s “the woman who I want to spend the rest of my life with.” (Side note: Finding a platinum band to fit around a baseball is prohibitively expensive. Also: Josh reads books?!) Andi attempts a dramatic fakeout — discussing “ups and downs, twists and turns,” her fears, and how she “remembers and appreciates” (code words for “I just want to be friends”) their connection. Finally, though, she zags left when he’s expecting her to zig right and break his heart. “Josh I have loved you since the moment I laid eyes on you,” she says. “Out of everything I’ve been through, I know I love you.” * Andi then confesses she wants to have babies with Josh. He gets down on one knee, slips a Neil Lane diamond on her finger, and asks her to marry him. She says “yes” as dramatic music swells and cameras capture their kisses from eight different angles. The couple then proceeds to consume each other’s faces as the Bachelorette nation oohs, coos and places bets on when a People magazine breakup cover will hit newsstands.

UPDATE: On “After the Finale Rose,” Nick finally gets to see Andi face to face. He hems and haws and says he’s “eternally grateful” for opening him up to love. And then — uh-oh — things get uncomfortably real. Andi tells him there was “nothing wrong” with their relationship “except something else was more right.”

“First of all, I think that’s kinda below the belt,” Andi responds, seeeeeething. “I think that’s something that’s private and should be kept private.”

Nick says he’s not trying to go below the belt, but Andi sagely notes that he already has. Needless to say, she does not dramatically run to the airport gate to stop him from going back under the rock from which he emerged.

Josh returns to the stage and says he’s been trying hard to get Andi pregnant. “Just kidding!” he adds, looking like he might possibly attempt to hump her leg while she swats him with a rolled-up newspaper. Chris Harrison calls the Atlanta natives’ connection “fate” and “a beautiful thing” then makes a creepy joke about “roleplay” after Andi says she needed to wear a blonde wig to sneak visits to Josh’s place before the finale aired.

And that’s the kind of storybook ending to which every young single fameosexual can strive, no?

Your turn. What did you think of this season of The Bachelorette? Did Andi make the right choice? Did Nick’s fantasy suite comment truly go below the belt, or are all bets off in the Bachelorette arena? Sound off in the comments!