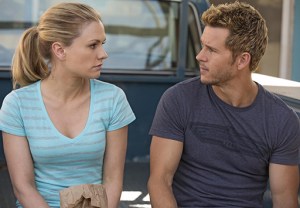 “Waiting sucks” took on a whole new meaning during Sunday’s True Blood, as Sookie was forced to sweat out the results of her Hep-V blood test. Is she responsible for inadvertently sentencing Bill to death?

Sadly, the answer is yes; after the midnight assault on Fangtasia, when those H-Vamps exploded all over Sookie, she contracted the Hep-V virus and passed it along to Bill during their feedings. Even though it was obvious her test results would come back positive, it was heartbreaking watching Sookie wait for the news, and even more heartbreaking watching her wrestle with the guilt of finally knowing.

Bill also suffered a wait this week, as he took a number at his lawyer’s office in order to make some last-minute changes to his will. You couldn’t help but feel his pain, especially as his Hep-V began to spread right before his very eyes. And by the time he time he finally saw his lawyer, he was so frustrated by her inability to help, he staked her. Boom, dead. (By the way, can you believe they made the Bill Compton take a number? This would never have happened back when he was “Billith.”) But just when things seemed their bleakest, the fans — and a certain Viking vamp — were finally given some good news: There’s a cure!

FIX YOU | After a troublesome — and entirely too long — imprisonment by the Yakuza, Eric and Pam were finally released to help them track down Sarah Newlin; and they all got more than they bargained for when her sister Amber answered her door, completely cured of Hep-V. It turns out Sarah has the antidote coursing through her veins, which means she can help save Eric and Bill (and the rest of the world’s infected population, I suppose). But the question is: Will that be enough to keep Eric from slaughtering her? Probably not.

(Also, how great was Amber’s line to Sarah: “You can’t just dye your hair and blow a guru and absolve yourself of all the horrific s—t you have done in your life.” The truth hurts sometimes.)

YA DIG? | In an attempt to prove that Lettie Mae’s visions of Tara were merely drug-induced hallucinations, Lafayette agreed to join her on one last V trip — and oh, what a trip it was. They both ended up seeing Tara, who hopped down off her cross and led them to her childhood home, where she started digging like a crazy person. Reverend Buzzkill busted in and broke up the fun before LaLa and Crazy Pants discovered why Tara was tearing up the ground, but they’re determined to find out. ( James was also waiting for Lafayette when he came home, which was sweet, albeit a case of breaking and entering.)

TROUBLE IN PARADISE | Nicole and Sam’s relationship has never been a traditional one, but now it’s looking like they might not even have a future together. Following last week’s sudden outburst — cliff-notes version: “Everyone in this damn town is crazy!” — Nicole told Sam she wants to leave Bon Temps behind so their family can have a brighter future. But will he agree to leave with her? Time will tell…

VIOLENT VIOLET | In case you weren’t already concerned about Violet’s fragile mental state last week, this Sunday’s episode confirmed it: Jason’s vampire lover is insane, and she’s not OK with the prospect of losing Jason to his ex. Even after she seduced him in skanky lingerie, he still took Jessica’s call and went to her side, forcing Violet to do the only logical thing: bug out and smash all the furniture in Jason’s bedroom. (Wait, did I say logical? Scratch that.)

THE KIDS ARE NOT ALL RIGHT | Less than 24 hours — in show time, at least — after Andy proposed to Holly, the engaged couple had its first major blowout when Andy caught Wade and Adilyn doing it in their house. (Apparently not everyone in Bon Temps is allowed to have sex anytime, anywhere.) Not only did Andy’s reaction irk his bride-to-be, but both of their kids ended up running off to Fort Bellefleur.

So, what did you think of this week’s episode? Were you surprised to learn there’s a cure, assuming you didn’t already watch the Comic-Con trailer? Drop a comment with your thoughts on tonight’s hour below. (Only four more left!)