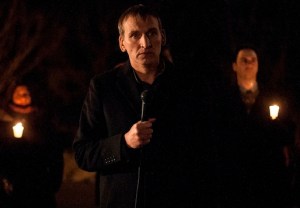 Since this week’s episode of The Leftovers was titled “Gladys,” and since nothing even remotely pleasant ever happens on this show (at least not unless Garvey and Nora happen to cross paths), you can probably guess that it doesn’t go well for the title character.

But what you probably can’t guess is that, over the course of the hour, not one but two members of the Guilty Remnant break their vow of silence, and what transpires on screen takes away our ability to utter anything but gasps. (It’s that horrific.) Scared? You should be. But let’s recap this sucker, anyway….

FOR THOSE ABOUT TO ROCK… | This installment opens with two members of the GR — the matronly, bespectacled one being Gladys, we learn — wandering around town being, as they are wont to, awful. When the other one takes a break from their awfulness at a gas station restroom, Gladys is grabbed by some masked men, dragged into the nearby woods, duct-taped to a tree and stoned to death. And, as despicable as she and the rest of the GR are, it is still damn near impossible to watch. “Please stop,” she finally says. But, of course, they don’t. (To borrow a line from Phoebe Buffay, “My eyes! My eyes!”)

AN OUNCE OF PREVENTION | When Garvey is alerted to the murder, he’s already elbow deep in The Mystery of My Missing White Shirts and trying not to notice that Aimee has taken to sleeping over in lingerie that could’ve come from a Vanity 6 garage sale. To his surprise, Patti agrees that the GR must stay off the streets for their own safety until the killers are caught. Less cooperative is enigmatic, tobacky-chewing Dean, who happened upon the crime scene while hunting wild dogs and wants his rifle back. “It doesn’t shoot rocks,” he notes. Later, Garvey pays a visit to Jill’s school to let her know what has happened and that her mother is OK. But before he can get the words out, Jill imagines the worst and breaks down. Once she learns the truth, she’s pissed at herself. “I shouldn’t’ve cried,” she says. “She wouldn’t’ve cried for me.” Sad but, as far as Jill knows, true.

THAT WAY MADNESS LIES | While Meg takes Gladys’ murder as a predictable side effect of the GR’s mission, Laurie is hit hard. So hard, in fact, that she suffers a panic attack. After she’s released from the hospital, Patti books the two of them rooms at a motel and gives her colored clothes to wear the following morning at breakfast. Then, over coffee and eggs and really pretty much everything short of mimosas, the GR leader speaks freely and explains that, every so often, they all need a day off from their religion. She took Gladys there once, too, she adds, when Gladys had somehow found out that her son had been killed in Yemen. “She began to feel again,” Patti notes. And feeling is as bad as doubt, “because doubt is fire, and fire is gonna burn you up until you are but ash.” (Mm-hmm, check please!) Throughout the meal, like Gladys before her, Laurie doesn’t utter a syllable. But Patti continues to indulge herself by getting a doggie bag (to fill with her own excrement, if I had to guess) to leave on the doorstep of someone named Neil.

AND THE HITS JUST KEEP ON COMIN’ | Back in Garvey’s miserable corner of the story, the chief gives the GR rape whistles for protection (since the entire town council opposes the curfew he suggests/Mayor Lucy supports); he hits the roof when a very suspicious-seeming Det. Vitello directs Gladys’ murder investigation to a Fed (who creepily offers to make Mapleton’s cult problem “go away”); he all but assaults the dry cleaner who’s got his missing white shirts; and, finally, he sobs into a pillow after admitting to Jill that he and her mother are divorcing. (Anyone for a rousing chorus of “Everything Is Awesome”? Anyone?) Meanwhile, at the cul-de-sac, eager Meg starts wearing all white (Labor Day be damned!) to signify her commitment to the GR, and Laurie erases all traces of her humanity — and doubt — by interrupting Matt’s Mr. Microphone-assisted memorial service for Gladys by screeching at him with the very rape whistle Garvey left to save her sorry ass. Charming, no?

OK, your turn. What did you think of the episode? As loathsome as the members of the GR are (extremely), didn’t you find Gladys’ murder beyond harrowing? Hit the comments!