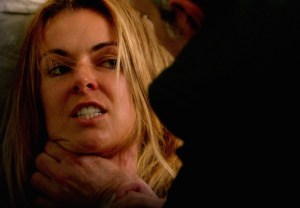 THE EPISODE | “The Unlucky One”

THE PERFORMANCE | DEA Agent Paige Arkin never could have imagined her latest take-down would play out as it did. Aiming to end a ring of drug muling/human sex trafficking, Paige’s No. 1 lead died in her arms, prompting the mission-focused Fed to take the young girl’s place. That impetuous decision, however, delivered Paige into a dingy den of inequity, where girls are thoughtlessly sold off to less-than-genteel gents. As Paige endured her dilemma, Swan reflected both her character’s abhorrence for the commerce she’d become a part of as well as her fear of what awaited not just her, but the victims alongside her.

Yes, Mike “saved the day” by arriving undercover to purchase the one known as “Anica,” but for Paige that skirted the larger, loathsome problem. She was apoplectic that the grander, cartel-crushing endgame prevented them from shutting down the traffic ring there and then. Once back at Graceland, Swan used silent moments to register the utter helplessness that even the mightiest lawman can feel.

That human trafficking is a scourge Swan, off camera, tirelessly endeavors to combat only deepened the resolve in her performance.

doesn’t get out in the field much. As such (and as strong as he is physically), he’s susceptible to emotional punches. This week, as he aimed to recruit an asset — no less than his ex-lover Natasha — Christopher Gorham showed us that while ostensibly in control of his feelings, Auggie was not. So, when a setback required him to cheat his ex out of an immunity deal, Auggie couldn’t do it (leaving Annie to do the dirty work). In a drunken scene, Gorham played out Auggie’s disgust for the game they must play, as well as his disappointment in Annie. The good news? Natasha found her way back into Auggie’s arms. (Though that’s bad news for his already crowded love life!)

always been the driving force behind The Fosters‘ Lena, whether doting on her unborn daughter or supporting her five (mostly) teenage children. In “Mother,” Sherri Saum used that same love to fuel Lena’s fierce desire to prevent a premature birth — even at the possible cost of her life. Later she let Lena’s defenses fade, tearfully telling her mother that she craved a biological child because she feared that her adopted children might reject her love some day. Finally, Saum drew on that love as Lena put her family’s needs over her wants, breaking her heart… and ours.