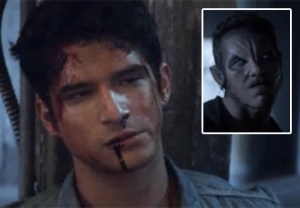 Malia, Kira, Derek… Is anyone not chillin’ at Death’s door in Teen Wolf‘s midseason trailer? (That’s a rhetorical question, by the way. No one is safe.)

Originally screened Thursday during the show’s panel at San Diego Comic-Con, the trailer previews what we can expect in the coming weeks. Cliff-notes version: It’s not looking good for anyone.

Impending dangers include Derek’s speedy descent into humanity, massive explosions at the hospital — why is Mama McCall crying? — and worst of all, a wolfed-out Peter who seems intent on ending Scott’s plucky young existence.

Fortunately, the trailer isn’t all doom and gloom. In addition to a nice Scott/Kira kiss, we also see Derek getting his shirtless freak on. And is that a Stiles/Lydia hug at the 1:05 mark? This just got real.

Hit PLAY on the trailer below, then drop a comment with your theories: How is the first half of Season 4 going to end?