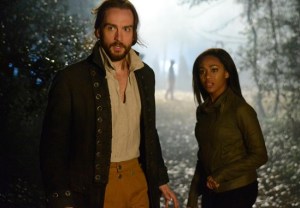 War is coming to Sleepy Hollow – but it’s not all bad news.

But, EP Roberto Orci noted: “Whatever you think is coming, isn’t what’s coming.”

As for the show’s central relationship, star Nicole Beharie revealed that Abbie “learns about why she’s a witness. At the end of the season, Ichabod betrayed Abbie by drawing the map. So now they have a bit of catching up to do.”

HISTORY REVAMPED | There’s lots of “twistory” coming, as one of the producers put it. “Starting in the premiere, we’re going to see a lot of Benjamin Franklin,” Goffman teased. “[Crane and Franklin] have an uneasy relationship. And Benedict Arnold makes an appearance.”

ICHABBIE | The cast and producers are sticking with what they said at the Television Critics Assoc. Press Tour last Sunday: Romance is not on the horizon for Abbie and Ichabod. “We did not conceive these characters by what you all have taken away from this relationship,” EP Heather Kadin said. Still, the set-up provides for a great dynamic between the two. “Starting with characters that are from such different eras gives us a long breadth to go,” Goffman said. With the fate of the world at stake, “They have to work together. The two of them together, they’re this amazing couple. … They have their differences, and they air them out.”

THE GOOD WIFE | “There’s actually a really interesting [relationship] forming between Headless and Katrina,” Katia Winter teased. While everyone else only sees Headless, “Katrina can see him as Abraham.” Viewers will also get to see more “in depth why [Katrina and Ichabod] love each other so much.”

NEW ADDITIONS | Matt Barr (Hellcats) will play an arms dealer, while a new sheriff who shares a history with Abbie’s mother will pose an obstacle for Abbie and Ichabod.