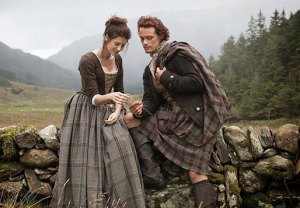 “What if your future was in your past?” asks Starz’ Outlander in the new trailer it debuted at San Diego Comic-Con this Friday — only weeks ahead of the show’s premiere on Aug. 9 at 9/8c.

Adapted by Battlestar Galactica producer Ronald D. Moore from Diana Gabaldon’s best-selling novel, the show centers on Claire Randall (Caitriona Balfe), a married combat nurse from 1945, who mysteriously travels back in time to 1743, where she becomes an “outlander” in the unfamiliar Scottish highlands. When she is forced to marry Jamie Fraser (Sam Heughan, Doctors), a dashing young Scottish warrior, they begin a passionate affair, forcing Claire to choose between two vastly different men in two irreconcilable lives.

Watch the trailer and drop a comment telling us if you’ll be tuning in!