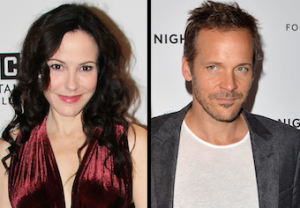 Mary-Louise Parker and Peter Sarsgaard now have a hand in The Slap.

The Weeds and Killing stars, respectively, have joined NBC’s miniseries about a family that falls apart after one man slaps another couple’s naughty child, our sister site Deadline reports.

Sarsgaard will play Hector, cousin to the slapper. Hector is a husband and father tempted by his wife’s teenage receptionist during a party.