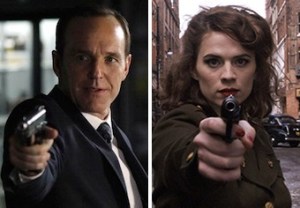 Is Agents of S.H.I.E.L.D. bringing on a costumed hero?

At Marvel TV’s San Diego Comic-Con panel on Friday, a special video featuring not one but two Patton Oswalts (as S.H.I.E.L.D.’s Billy and ??? Koenig) announced that Barbara Morse – aka costumed Marvel comics hero Mockingbird – was calling for Director Coulson. “She just wanted to say that if he needs her, she’s in,” declared one the Koenigs.

RELATED Lucy Lawless Recruited By Agents of S.H.I.E.L.D. — What Role Will She Play?

Furthermore, Dollhouse vet Reed Diamond will guest-star as Daniel Whitehall, “one of our Hydra baddies early on [in the season],” executive producer Jed Whedon revealed.

TAKING THE REINS | Captain America: The Winter Soldier directors Joe and Anthony Russo will direct second and third episodes of Agent Carter, it was announced. Meanwhile, Captain America: The First Avenger director Joe Johnson wants to helm the fourth episode, if his schedule allows. The upcoming 1946-set series will follow the adventures of Peggy Carter as viewers “see the cost psychologically and emotionally on someone who has to take on such extreme pressure in her life…and still have to hold it together,” star Hayley Atwell, who created the role in the Marvel One-Shot featurette, previewed.

GIRL POWER | Showrunner Michele Fazekas had this to say about whether other female characters will populate Agent Carter‘s male-heavy world: “We hope so. We actually have plans we couldn’t disclose to you. … There are other women in that world, too, who are just as powerful, both good and bad, who we hope to see.”

A STARK CAMEO | Will Dominic Cooper reprise his Marvel One-Shot role as Howard Stark aka Tony’s pop? “That would be fantastic if that could happen,” Marvel’s head of TV Jeph Loeb replied.