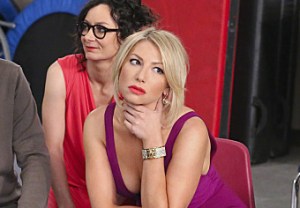 We’ve got questions, and you’ve (maybe) got answers! With another week of TV gone by, we’re lobbing queries left and right about shows including True Blood, Falling Skies, Switched at Birth, Under the Dome and Suits!

1 | Are your Saturday nights going to be a little less fun once CBS finishes burning off Bad Teacher this weekend?

2 | What’s up with Nicole’s sudden holier-than-thou attitude on True Blood? She originally came to Bon Temps looking for supernatural creatures, so where does she get off judging them for being so crazy?

3 | How much SFX budget do you reckon Falling Skies saved by keeping that Espheni hooded during Anne’s interrogations? Also, are we to believe that a Mech made out of near-impervious alloys does less damage to a speeding truck’s grill than your average deer? 4| Was this beautifully timed lower-third ad during Big Brother a coincidence, or subliminal messaging?

5 | How weird is it that TV’s darkest series of the moment, The Leftovers, managed to turn Garvey and Nora’s discussion of her vanished husband/his infidelity — plus Garvey’s unfaithfulness to his own wife — into something not only light but flirtatious? And regardless of how weird it was, wasn’t it a welcome break from the endless misery?

6 | On The Lottery, how is Alison’s idea to fertilize eggs by replicating the environment of a uterus “revolutionary”? Isn’t that something scientists would have tried already?

7 | Did you ever in a million years think that Food Network Star‘s “Texas food” expert Sarah would crack the Top 5?

8 | Wasn’t it alarming, the way Switched at Birth‘s Daphne leapfrogged from “I want to get high!” to “Let’s do coke!”? And given that both his daughters are still mourning the death of their other father, wasn’t John’s over-the-top peppiness a bit insensitive?

9 | How does Under the Dome’s Julia manage to look more primped and pressed than, say, a gal living in a bustling metropolis with full access to a salon and dry cleaner? And when, exactly, did Rebecca — a high school science teacher — learn to become a vet? And what did she mean by, “In 21 days, we’ll turn on each other”? Chester’s Mill grabbed pitchforks after 21 minutes!

10 | Can The Fosters’ Brandon and Wyatt have more scenes together? (It’s deliciously awkward goodness!) And after all the drama they went through with Timothy being the donor, wasn’t it doubly heartbreaking that Lena lost the baby?

11 | Who is secretly hoping that Mistresses’ Anna isn’t full-on crazy, but rather an agent of destruction hired by Karen’s old rival Elizabeth Grey? And should the show be a bit more balanced in distributing zingers to characters other than Joss?

12 | Did Major Crimes leave you jonesing for a Fritz-centric S.O.B. spin-off? Or does the fact that Brenda would be 3,000 miles away at her new D.C. job make you antsy, leaving McGinnis at Fritzy’s side?

13 | Has summer TV — including the sci-fi’d Extant, Under the Dome, The Strain — given us anything less believable than Covert Affairs’ Perrey Reeves firing an automatic weapon? But isn’t it kinda awesome how the spy drama just goes to Paris (or wherever), when needed? No L.A. backlot, no “sweeps” hullabaloo, they just pack up and go! (Of course, that can mean shooting during a Parisian rain storm, sure, but….) 14 | After the big deal they made about the fliers at the beginning of the episode, didn’t Finding Carter‘s Bird and Carter get over their disagreement fairly quickly? And between his charming, delightful roles on The Fosters and Finding Carter, is Alex Saxon summer TV’s MVP?

15 | Seeing how suspiciously curious Pretty Little Liars‘ Sydney was when talking to Hanna, is it fair to assume that she is A’s latest minion? Also, why was Caleb buying three brownies?

16 | Can Paget Brewster narrate all of Drunk History‘s tales from here on out?

17 | Though Suits’ hostile takeover storyline seems to have lasted forever, did it move too quickly within each episode? (This week alone, those “shares” traded hands like a half-dozen times!) And can we talk about the grin on Louis’ face when Harvey praised him? Lastly, was Jeff talking to Jessica through her office’s glass door here, or oddly standing halfway behind it…?

18 | Are we ever going to see what Young & Hungry‘s Josh sees in Caroline?

19 | Why do people keep hiring the Mystery Girls? Wouldn’t they be better off going to the police? 20 | Whose beard makes you itchier? The Bridge’s Linder, or Will Forte (appearing at TCA for Fox’s The Last Man on Earth)?

21 | Considering all the untouched stacks of money in the casino vault on Dominion, what currency does the city of Vega use? Also why was Michael sharing so much important information in front of Uriel?

22 | Surely Dr. Rush’s unorthodox, unethical “medical practice” hasn’t gone completely unnoticed by someone at the AMA, right? Wouldn’t it be too easy for him, as (almost) happened with the “country boys” this week, get ratted out?

23 | Did this Defiance moment make anyone else think of Gene Hackman at the end of The Birdcage? (And what would John McClane say?) Also, are we alone in weeping for Churchill?

24 | On a scale of 1 to TMZ, how soul-crushing do you find Hollywood Today Live?

25 | Which TV crime drama will be the first to base an episode around this week’s horrifying real-life story from a California gated community, where porcelain dolls were placed outside the homes of little girls whom they resemble?