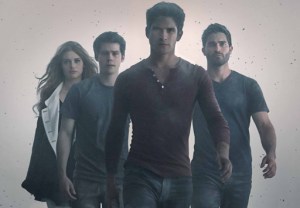 The Teen Wolf pack assembled Thursday at San Diego Comic-Con (to banshee-level shrieks) to drop some serious bombs. Because in addition to touting the show’s 20-episode renewal, there was another big announcement: Newly beta’d cast member Dylan Sprayberry will be a series regular come Season 5.

Now, onto other important matters…

“They’re unique,” Shelley Hennig said of Stiles and Malia’s relationship. As for whether or not they have sex — thank Tyler Posey for that question — Hennig said that “of course” they do… before executive producer Jeff Davis killed all of our happiness by adding that Stalia has a “rocky road” ahead of them. (The secret of Malia’s “parentage,” Davis said, will cause major issues.)

Speaking of secrets, Derek hasn’t told everyone about his whole ‘I’m losing my powers’ debacle. “He’s going to have to figure out who he is when he’s not a werewolf,” Tyler Hoechlin said of Derek’s big change. “It’s being a human, moving on and finding your identity.”

Lydia will also struggle to find her identity as a banshee, a journey that will kick into high gear this season as we learn more about her family and her past. “One of the things we’ve really enjoyed about crafting [Lydia’s] arc is that we can do it slowly,” Davis said. “We can do it over seasons and seasons. It’s a struggle for her to master her powers, and we’re going to see in the next two episodes how she struggles with that.”

A montage of scenes from upcoming episodes found every member of the pack in dire straits, including Derek, who — don’t shoot the messenger! — appears to be dying. The gang is also changing the rules of the dead pool game by making their own list of assassins to kill.

There’s “a lot of decision-making” in the coming weeks, Davis explained. “A lot of character arcs [are] coming to a finish. One of the last lines [Peter] says is, ‘It was my bite that changed your life; it’s my bite that can end it.'” (Spoiler alert: Peter was in full wolf makeup when he made that threat.)

So, Teen Wolf fans, who do we think is going to die next? Drop a comment with your theories below.