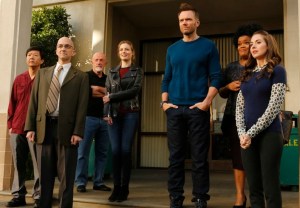 Your Community is not getting gentrified.

The resurrected NBC comedy may have a new home on Yahoo Screen, but that’s the only thing different about it, creator Dan Harmon promised fans at the show’s Comic-Con panel on Thursday.

“The Community that [fans] recognize needs to be there,” Harmon said, insisting that he has no “big, highfalutin plans” for the weekly webisodes.

“My philosophy is: Attempt to make the same show, and let the lack of boundaries make themselves felt,” he said.” I don’t want to take the wheels off so much that people think, ‘This is a new show.’”

So when will the not-new new episodes hit the web? The writers don’t go back to work until the fall, so don’t expect new installments before Christmas — at the earliest.

A SIXTH LIFE | How did the show survive to live another season? “I don’t know,” Harmon admitted. “I don’t know how Joel got me my job back for Season 5. Sony and Yahoo, they’re giant corporations. Their tentacles reach. Hail Hydra.” After some mixed feelings about the Yahoo option, Harmon decided, “Does it really matter where you’re doing this? I can’t be the one to not do this. Wherever the show is, people will find it… You’ll be watching this the way you always watched this – only now it’s legal.”

OH HAPPY DAY | Star Joel McHale said he had “no doubt that we would be back… Like a Japanese general in World War II, the only option was victory or suicide.” He added, “I was ready to do a regional theater version of the show.” McHale then noted that fans already watched the show on their phones’ and tablets’ tiny screens, not on live TV, and “Now we’re on one. So f–k you network television… unless they want us back.”

ROMANTIC INTERMINGLING 101 | Will Jeff hook up with Britta or Annie next season? “It’s on the Internet, so it’s probably Jeff and Dean now,” McHale joked. “Human beings fall in love,” Harmon chimed in. “Human beings have crushes. Human beings are sexual beings, which always complicates life in a… group of friends. It’s not just a workplace comedy. So centering it on one relationship would be the beginning of the end… You let these stories happen.”

HOLIDAY TREATS | Halloween and Christmas installments “might be tough” since the show’s streaming schedule has yet to be determined and the series wants to avoid having a Halloween episode go up in February, Harmon revealed.

SOS: SAVE OUR SCHOOL | Spoilers were sparse, but Harmon did reveal that Greendale Community College is “hanging in there. I like it as an underdog campus.”