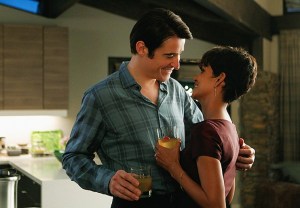 It’s Molly’s birthday – well, sort of — this week on Extant, and to celebrate, the universe gifts her with a giant box of WTF?!? (Hope you kept the receipt, universe: Molls already has that.)

The episode revolves around party John throws to make up for his wife’s spending her special day alone in space. But what he should celebrate is the fact that she finally ‘fesses up about everything she’s been keeping from him… which is a good thing, because by the end of the hour, Molly’s inner turmoil creates a lot of outer turmoil for her entire family — and then some.

Read on as we review what went down in “Wish You Were Here.”

THE GIFT THAT KEEPS ON GIVING | Thanks to a little veterinary facility B&E, ISEA Director Sparks becomes aware that Dr. Sam took an unauthorized peek at what’s growing inside Molly’s uterus. As he wonders how best to bring the astronaut in for further study, we learn that Molly was pregnant once before, with Marcus’ baby, and she miscarried in the same car accident that killed Marcus.

Over at Casa Woods, Molly lies in bed and remembers the day that John first pitched the idea of raising Ethan as their own child. The short version: She wasn’t psyched. “You can’t just plug-n-play a family,” she counters in the flashback, adding that she’s just signed up for a stint on the Seraphim. In the present day, though, John and Molly are much happier and chat about the business of the day: Ethan’s school orientation, Molly’s aforementioned make-up birthday bash and – most importantly – some morning sex. (Yes, we’ve covered this before, but John could proto my type anytime he wanted. Moving on!)

RELATED CBS’ Fall Schedule Kicks Off With Thursday Night Football; Two and a Half Men, Elementary to Premiere in Late October

THE CIRCLE GAME | A meeting with Sparks doesn’t put any of Molly’s fears to rest; he lies explains that a “covert program in the medical center” at ISEA pulled some nanotech kung-fu and reversed her infertility without her knowledge or consent. So their cover is that instead of alien ghost rape, Molly instead is the victim of mini-robot rape? Awesome.

I’m going to chalk Molly being upset to her overly dramatic and clunky monologue when, at Ethan’s orientation, a few other parents object to “a toaster with hair” being allowed to learn alongside their children. “He’s not dangerous, he’s different. And you don’t have to be afraid of different,” she says. Non-toaster’s dad looks about as excited about that romp through Free to Be You and Me as I am, Molls.

Later, Molly swings by Kryger’s trailer and finds him gone (permanently?), then notices the same circular pattern that popped up on her abdomen inscribed on his wall. She takes a cell-phone photo and leaves, but it soon becomes clear that ISEA is tailing her and doesn’t even care if she knows.

FOR SHE’S A JOLLY SCREWED FELLOW | Still, once a futuristic Evite has gone out, it must be honored, eh? So Molly’s friends and loved ones show up at her house for the second time in, what, two weeks? for another party in her honor. Dr. Sam brings a blood-draw kit (disguised as a gift? Is that level of subterfuge really necessary?) and takes some from Molly, promising to return in two hours with the results of the baby’s DNA test. But right after she leaves, those circles pop up on Molls’ arm and she doubles over in pain, flashing back again to Faux-cus (yeah, I’m still gonna use that) on the ship telling her that it’s OK.

She recovers and comes downstairs in time to greet Tim, Marcus’ brother, whom she hasn’t seen since the car accident. They reminisce a little and he mentions seeing Marcus everywhere. He means it metaphorically, at least that’s what we’re led to think until the end of the party. More on that in a minute.

Ethan gets in trouble with John for breaking the rules – he went outside and trapped a bird, which isn’t helping your creep factor, kid – but Papa Woods soon is distracted by his son’s mention that Molly is keeping a secret. When John confronts his wife in their bedroom while the guests revel downstairs, Molly has no choice but to admit that she’s expecting. “The ISEA did it,” she says, and he completely buys it. Not that I would want him to jump to the adultery thing, but isn’t it possible John’s a wee bit too trusting of his totally shifty wife?

NOWHERE MAN | Anyway, back to Tim: As the festivities wane, Molly asks John if the guest in question has left yet. John has no clue what she’s talking about… because Tim was never there. A group photo taken earlier in the evening backs that up: Though Molly clearly recalls Tim standing next to her when the flash went off, there’s just an empty space by her side.

This realization sets off a Jupiter-sized freakout that sends Molly off with Sparks for more tests. John, rightly, is all, “They robo-knocked you up, and you’re going back there?” So she spills everything else she’s been hiding – about seeing Marcus on the ship – and hops in the car with Sparks.

At that exact moment, some strong-armed goons are confiscating everything in Sam’s ISEA office. So she calls John to find out where Molly is and sends off an emergency text – “Get out of the car! – to her pal before the big guys can stop her. As Molly and Sparks tussle for the wheel, he sees the circles bubble up on her abdomen. When he finally pulls over, Molly jumps out and runs away, straight into the path of John, who’s come to rescue her.

When an ISEA assault team (totally normal for a scientific entity to have automatic weapons and riot gear, right?) storms the Woods home, they find it empty. “They’re gone,” an officer informs Sparks.

Now it’s your turn. Did you think the Julie-Ethan stuff was sweet? Is John too trusting of Molly? Are you surprised that Sam isn’t one of the bad guys? And where’s Yasumoto? Sound off in the comments!