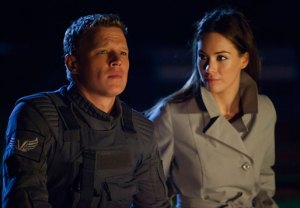 Dominion‘s Claire Riesen has had to deal with a lot of change this season. But will she be able to handle what’s in store for her on Thursday’s episode (Syfy, 9/8c)?

Roxanne McKee, who plays Claire, tells TVLine that while the events of this next episode might bring out Claire’s darker side, people will definitely understand where she’s coming from.

Here, the British actress talks about Claire’s “personal and professional” growth, an emotional Riesen family reunion and her relationship with Alex.

TVLINE | Claire standing up to David last week marked a real change in her. How will that affect her going forward?
Standing up to David was a real turnaround for her because she’s never had to do that before. She’s always had her father to protect her and she’s had things done for her. She believes that the right thing should be done [so] it was inevitable that she was going to voice her opinions. Now we’re going to see just how manipulative she can be for the greater good — or what she believes the greater good is.

TVLINE | We’ve seen her father make a lot of decisions for her. But now that she knows about his illness and she’s found this new confidence, will we see her make decisions for him?
A hundred percent. [And] not just because of his illness, but because of what she finds out about her father. Their relationship is going to be very strained. What’s coming up over the next two weeks is going to change Claire’s world forever. Her innocence is lost. TVLINE | It sounds like Claire will be going on quite the emotional journey.
She’s never going to be the same again. She’s going to meet the person that she wants to meet most in her life and then she’s going to have to deal with everything that that involves. She will never ever be able to get over the emotional pain that is coming up for her. She might be able to put it behind her, but she’ll never get over it.

TVLINE | Will finding out that her mother is an eight-ball change how Claire feels about angels?
It will make her think. She will have to decide whether she believes that the creatures have warmth to them, that feeling that is comparable to humans. Right now, she believes that eight-ball’s are  superficial evil and [that] no attention needs to be paid to them other than to get rid of them. Because that’s what she’s been taught all her life, and that’s what’s in the literature that she’d read about. This is a coming-of-age story for Claire. She will come into her own way of thinking about everything and everyone around her. There’s going to be massive changes.

TVLINE | Does this mean she’ll interact more with Michael now?
A little bit. Claire is suspicious of Michael… But what comes up in this week’s episode changes her feelings quite significantly. Certainly, Michael’s someone who’s been a part of that. Where before she believed that things are black and white, she feels now there’s a grey area and that Michael perhaps falls into it.

TVLINE | How does what Claire goes through with her parents affect her relationship with Alex?
She feels that Alex has brought her into a situation that is so painful, she’s not sure whether there’s any coming back from that. She also feels that maybe he wasn’t sensitive to her feelings on the situation — the wool has been pulled over her eyes by her father and Alex brought this to her attention and “the messenger [got] shot.” Because of that she feels that life can’t just be about [them] any more. She has to do what she thinks is right for the bigger picture. That’s when you see her rational side kick in.

TVLINE | Now that they’re engaged, is there a chance that Claire might actually fall in love with William?
She admires him and thinks he’s a good person, but does she look at him and want to rip his clothes off? No. She’s too young and passionate to settle. I don’t think she’ll fall in love with him. She loves him in a different way — like you love your brother… or a puppy.

TVLINE | What about Becca and Arika? Will we see her interact with them a little more? Does she turn to Becca for support?
You will see her a little bit more with Arika. Becca’s been like an older sister, growing up with Claire [so she] has a respect for her. But with everything that’s going on, Claire doesn’t trust anyone anymore… She needs to take some time for herself just to think and she feels like her brain is quite capable of doing its own thinking. She certainly doesn’t want advice from other people.